Cole Custer / Production Alliance Group Ford Mustang Recap:
– Custer started fifth and raced up to the third position on the initial start.
– The No. 00 Production Alliance Group Mustang stayed out under caution on Lap 3.
– The No. 00 restarted third on Lap 12 and raced his way to the second position by the conclusion of Stage 1.
– Custer scored nine points in Stage 1, before coming to pit road for routine service at the end of the stage.
– The No. 00 Ford started second in Stage 2, and immediately raced to the lead by passing Christopher Bell.
– Custer scored the Stage 2 victory to pick up 10 points and a playoff point.
– The No. 00 team started the final stage from the second position, but reclaimed the lead on Lap 102.
– Custer had an issue on the Lap 150 restart and got shuffled back to the 11th position.
– The No. 00 Ford came to pit road under caution on Lap 163 for four tires and fuel before coming off pit road in the ninth position.
– Custer raced his way back to the third position when a caution flag waved for an incident between the leader and second-place car.
– Custer restarted from the lead on lap 188 and held it for two laps before getting shuffled back to the ninth position.
– The No. 00 Ford restarted ninth on lap 196 and crossed the finish line in 11th.
– Custer scored one stage win and led five times for a race-high 85 laps.

Cole Custer, driver of the No. 00 Production Alliance Group Ford Mustang:
““We had a really fast Production Alliance Group Ford Mustang. I wish we could have had an easier day. We had a really fast car and could have competed for a win but a lot of things went wrong. We went through one and two there and Reddick couldn’t hold his car on the bottom and washed us up into the fence. I just wasn’t very happy with it and was just going to tell him that and he went berserk on me. I guess that is part of it. I just wasn’t very happy with it. He just said, ‘Don’t touch me,’ then he started grabbing on me.” 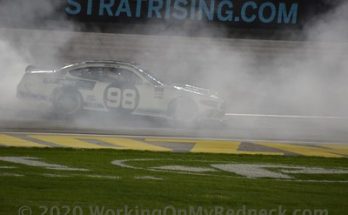