Paul Menard and the No. 21 Motorcraft/Quick Lane Mustang ran in the top 10 – and often in the top five – for most of the first two stages of Sunday’s Bank of America ROVAL 400 at Charlotte Motor Speedway before the craziness of the final stage left them with a 16th-place finish.

Menard qualified 10th for the second-ever Cup Series race on the 2.28-mile road course at Charlotte Motor Speedway but moved up to sixth for the start after two drivers ahead of him had to drop to the rear before the start of the race.

Menard stopped for fresh tires and fuel near the end of the first 25-lap Stage and wound up 11th at the end of that segment.

Because he’d already pitted, he moved up to sixth place for the ensuing restart and held that spot through the majority of the second Stage before ending up in ninth place at the end.

Menard, who had already dodged several crashes in the first two stages, continued to evade spinning cars in his path, but his fortunes took a turn for the worse just after a restart with 16 laps remaining when he was collected in a multi-car crash in Turn Six.

After a trip to pit road for repairs, he rejoined the race in 32nd place and by avoiding more incidents in the final laps worked his way to 16th place at the checkered flag.

Eddie Wood said he was proud of the speed of the Motorcraft/Quick Lane Mustang and not overly disappointed with the day’s overall results.

“Things were going our way, and Paul was doing a good job missing the wrecks until that one late in the race when he got hit from behind, and it messed up the right rear and the right front,” Wood said. “The crew got it fixed and got Paul back out there, but he was in the back in dirty air, and everybody was fighting for every inch.

“It was just a war back there.”

Menard and the No. 21 Wood Brothers team return to the track next week for the 400-miler at Dover International Speedway. 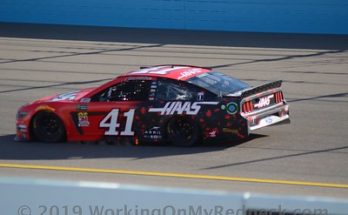