● The No. 4 Busch Beer Ford Mustang pitted on lap 86 for four tires, fuel and a chassis adjustment. Harvick said the car was a bit tight.

● The No. 4 Busch Beer Ford Mustang hit pit road on lap 130 for four tires, fuel and a chassis and tire pressure adjustment. Harvick said the car was still too tight.

● On the restart, Harvick shot up to second from fourth.

● Harvick got by Chase Elliott for the lead on lap 163.

● While in the lead on lap 191, Harvick hit pit road for four tires, fuel and a tire pressure adjustment, but he said the car was a bit too free.

● On lap 244 Harvick pitted, but the car had a mechanical issue and was forced to go behind the wall. Despite the hard work of the Busch Beer crew, the problem was not fixable and Harvick was out of the race.

●  Harvick led once for 28 laps to increase his laps-led total at Bristol to 909.

●  Denny Hamlin won the Bass Pro Shops NRA Night Race to score his 35th career Monster Energy NASCAR Cup Series victory, his fourth of the season and his second at Bristol. His margin of victory over second-place Matt DiBenedetto was .502 of a second.

●  There were eight caution periods for a total of 61 laps.

●  Only seven of the 39 drivers in the Bass Pro Shops NRA Night Race finished on the lead lap.

●  Kyle Busch remains the championship leader after Bristol with a 39-point advantage over second-place Joey Logano. 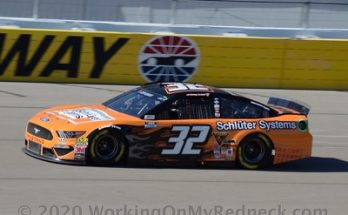