● The No. 14 One Cure Ford Mustang dropped a couple of positions to eighth on the opening lap, then held that spot until dropping another position to Denny Hamlin on lap 13. Bowyer reported a slightly loose racecar entering the corners and tight on exit in the opening laps of the stage.

● Bowyer settled into 10th the middle part of the stage and said the loose-in, tight-off condition was gradually getting worse as the run progressed.

● He pitted for the first time under green on lap 43 for two right-side tires and a track-bar adjustment.

● Running 14th after the field completed the first round of pit stops, Bowyer said he most needed help from the center of the corners off.

● He pitted during the stage break on lap 63 for four tires and a round of wedge in the right rear.

● The No. 14 One Cure Ford Mustang snagged a pair of positions on the opening lap of the stage and ultimately settled in 13th by lap 72. Bowyer said the changes during the most recent pit stop made the car “way better” but that it was “terrible in traffic.”

● On lap 111, just before the end of the stage, Bowyer pitted just to top off the fuel tank and resumed in 10th place.

● He stayed out during a caution period that began on lap 113 and restarted fifth on lap 119 but dropped four positions on that final lap of the stage.

● Bowyer pitted during the stage break for four tires and an added pound of air pressure in the right-rear tire, and to raise the track bar.

● The No. 14 One Cure Ford Mustang moved to 18th during the opening laps of the stage and held that position until the caution flag appeared for an accident on lap 133. He stayed out during that caution and restarted 18th on lap 137.

● Nearing the end of the restart lap, Bowyer was nudged in the left-rear bumper by Paul Menard and made right-rear contact with the turn-four SAFER Barrier. He pitted for repairs the following lap and rejoined the race on lap 140, three laps down in 32nd place.

● Four laps later, realizing the racecar needed further repairs but with too little time left to complete them, the team sent Bowyer to the garage and retired.

Clint Bowyer, Driver of the No. 14 One Cure Ford Mustang for Stewart-Haas Racing:

“Somebody got in the back of me. When I went around, I just saw (Alex) Bowman and thought it was him. I guess maybe the 21 (Paul Menard) or somebody. As soon as it happened, I was just along for the ride. I don’t know. We have to get something figured out with these racetracks. We are really fast by ourselves – practicing and qualifying really well, in the top-five almost every single time. But then we start the race and don’t make the grip we need to compete. We definitely need to find some things out. You can talk about the bubble and worrying about points, but I’m way more worried about getting established and running up front at these types of racetracks. If you make the playoffs and can’t compete in it, then what’s the use? We have some things to work out. We have some time. We have some good racetracks for us, including Bristol coming up. We have plenty of racing, but we have to get some things figured out.”

● Kevin Harvick won the Consumers Energy 400 to score his second win of the season and his third victory in 38 career Monster Energy NASCAR Cup Series starts at Michigan. His margin of victory over second-place Denny Hamlin was 1.054 seconds.

● There were six caution periods for a total of 24 laps.

● Twenty-four of the 38 drivers in the Consumers Energy 400finished on the lead lap.

● Kyle Busch remains the championship leader after Michigan with a 20-point advantage over second-place Joey Logano. 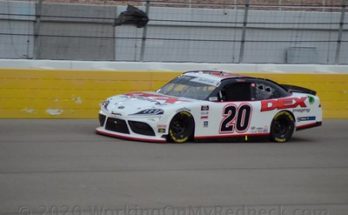