But that wasn’t the norm. Most drivers stayed in the lower lanes not treated with the PJ1—but with knowledge that the higher lanes would be available if needed in Sunday’s Consumers Energy 400 (3 p.m. ET on NBCSN, MRN and SiriusXM NASCAR Radio).

The consensus among drivers is that the application of the PJ1 for the first time at Michigan is a good move, but most would like to see the compound applied lower on the racing the surface than it currently is.

“I wish that PJ1 was a little further down,” said Kevin Harvick, who was fastest in the first Saturday practice at 190.501 mph. “We’d already have that third groove run in. I saw the 42 (Larson) and the 6 (Newman) and couple of cars up there running in it.

“We really need that groove to be there (Sunday) to give everybody three choices instead of two… It looks like right now it (the PJ1) needs to come down about three or four feet.”

No matter the location, drivers will use the treated lanes on Sunday to find clean air in the corners and maintain momentum.

“Track position still trumps the speed in the cars, because you have to position yourself correctly,” Harvick said. “In the swarm, you kind of have to just maintain and try not to put yourself in a bad position to lose a bunch of spots.

“Once they get singled out, you can start to use the speed of the car to really navigate ‘em one by one. So it’s definitely an interesting practice.”

Final Cup practice was interesting for Daniel Suarez, too, but not in a way he would have liked. Roughly halfway through the session, a punctured left rear tire sent Suarez rocketing toward the outside wall.

Suarez executed a deft save after slight contact with the barrier and slid across three lanes of traffic without hitting anything else.

“The good part is (the damage to) the car is not that bad,” Suarez said after the incident. “I feel like I did a decent job trying to keep the car out of the wall. But we’ll see. Hopefully, we’ve got a little bit of a break, and we can fix it.”

Erik Jones, who brings a string of four straight top-five-finishes to MIS, paced Happy Hour with a speed of 189.843 mph. Alex Bowman was second on the speed chart, followed by Harvick. 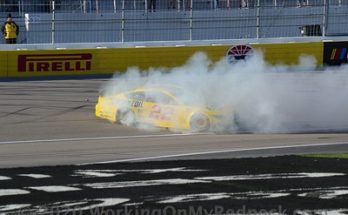