At Kentucky Speedway in Sparta last weekend, the Mexico native earned the pole position. It was the second of his Cup Series career with his first coming at Pocono (Pa.) Raceway last July. A speed of 184.590 mph earned him the prime starting position for last Saturday night’s 400-mile race at Kentucky. The pole award notched Suárez’s eighth top-10 starting spot in 2019.

Suárez led 52 laps at Kentucky but was forced to overcome an unscheduled green-flag pit stop for a flat tire, and a speeding penalty that eventually sent him three laps down. A fast No. 41 Ford, along with calls made by crew chief Billy Scott, enabled Suárez to get back to on the lead lap and finish eighth.

In his junior Cup Series season, Suárez has accumulated two top-five finishes and seven top-10s, along with a total of 105 laps led. The Mustang driver has an average start of 15.8 and an average finish of 15.3 this season.

The Haas driver is currently 18th in the Cup Series standings, separated by 10 points from 14th-place teammate Clint Bowyer to round out the four-driver SHR contingent. The top 16 drivers after the 26 regular-season races will earn a spot in the Cup Series playoffs. If Suárez captures a playoff position, it will be the first of his Cup Series career. Last year, all four SHR entries secured at least one regular-season win and a playoff spot.

In the NASCAR Xfinity Series at the “Magic Mile,” Suárez started third and finished fifth in 2015 and started fourth and finished fourth during his series championship season of 2016.

Daniel Suárez: Driver of the No. 41 Haas Automation Ford Mustang for Stewart-Haas Racing:

You seem to really gel with Billy and the guys on the crew. Why do you think that is?

“I think a lot of that credit goes to Billy. Billy built this team. All of these guys have been together for a while with Billy as the crew chief, and they were all together before I came here. I’m the new person to the group. We all like being around each other, even when we aren’t at the track. We like to hang out together and go and do different things outside of the racetrack.”

There seems to be a noticeable difference in your confidence this year. Why is that, or what’s different this year from previous years?

“I think it’s a combination of things. I feel really good about our communication and we are all very clear with each other. If I’m struggling, I know what my teammates have and they’re good about sharing information. As a whole at SHR, we are all very open with each other and I think that’s why you see us running near each other most of the time, but it makes me feel good knowing that all four of our cars and teams are on the same page.”

The 27-year-old has three Cup Series starts at the New England track with a best finish of sixth and a best starting position of ninth. 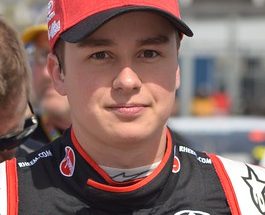