·        Ryan Blaney’s strong day in Sunday afternoon’s Coke Zero Sugar 400 ended when he was swept up in a multi-car crash on lap 118. The driver of the BODYARMOR Ford Mustang now sits 11th NASCAR Cup Series standings, 192 points behind the leader.

·        After persistent rain forced the postponement of the original start time Saturday night, Blaney and his No. 12 BODYARMOR Ford Mustang rolled from the 10th-place starting position when the race finally went green. Working with fellow Penske teammates Brad Keselowski and Joey Logano plus other Ford drivers, Blaney drove his way inside the top-five. He reported the balance of his Ford Mustang was loose on the both ends of the track. He took fuel-only during his first pit stop on lap 36 plus a track bar adjustment. Once returning to the track, Blaney returned to the track in sixth position when the green flag cycle of stops was complete. Using some nifty moves through the middle line of the lead pack, Blaney made his way up to third when the stage ended on lap 50. Under the stage break, the driver of the BODYARMOR Ford pitted on lap 52 for four tires, fuel and an air pressure adjustment, reporting his Ford Mustang was “edgy” in traffic.

·        Blaney started inside the top-five when Stage 2 went green on lap 55 and quickly made his way towards the front. He would return to pit road on lap 60 under caution for fuel-only to be able to make it safely to the finish of the stage. When the race went green, the driver of the No. 12 Ford Mustang was shuffled to the middle and top lanes but he made a late charge to finish 12th when the segment ended on lap 100. Blaney pitted on lap 102 for four tires and fuel plus an air pressure adjustment to aid a loose handling condition.

·        The High Point, N.C. native restarted in the top-10 when Stage 3 went green on lap 105. But on lap 118, while running on the high side of the track, Blaney was caught up in a multi-car pileup which ended his promising day.

Quote: “It’s one thing if you’re kind of pushing each other and someone gets turned, something like that, but when you just chop somebody like that, from what I hear, it’s frustrating, especially since we were rows back. In both Daytona races this year we’ve been four rows back in the deal and just get absolutely destroyed. There was nowhere to go and it wasn’t of our doing, but that’s the way it goes.” 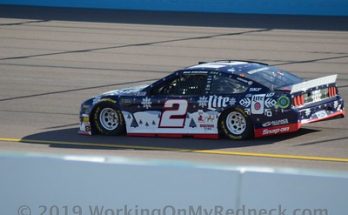