Clint Bowyer thought Sonoma (Calif.) Raceway was already a perfect fit for his driving style, so he’s admittedly leery about the addition of the “The Carousel” to the circuit’s historic 12-turn, 2.52-mile road-course layout for the Sunday’s Monster Energy NASCAR Cup Series Save Mart 350k.

“I’m a little bit torn on this,” Bowyer said. “I was surprised they added The Carousel back to the layout. I’m kind of old-fashioned and thought, you know, if it isn’t broke, why fix it, why touch it? And I didn’t think that track was broke at all. I think the tire and stuff has gotten a little bit too good for a track like that, but I always have thought it’s been a great product for our sport. Who knows, maybe, it’ll make it better and it’s certainly going to make it a longer race.”

The full track layout that will be used this weekend when the NASCAR Cup Series races the Save Mart 350k Sunday was originally unveiled when the facility opened in 1968. It includes the raceway’s signature sweeping downhill corner known as “The Carousel.” It plunges from turn four, down through turns five and six, and navigates a more than 200-degree-radius turn before dropping onto the longest straightaway into the turn-seven hairpin.

Since 1998, NASCAR has competed on a shorter, 1.99-mile configuration, which utilized a bypass connecting turns four and seven known as “The Chute.” Bowyer can make a good case for the old configuration. In 13 career races at the track just north of San Francisco, he owns a victory, eight top-five finishes and 10 top 10s.

The former body shop repairman who grew up amid the wheat fields of Kansas, nowhere near a road course, claims not to know why he runs well at Sonoma. But he can easily tick off what a driver must do to be competitive at Sonoma.

“You have to get yourself right,” he said. “That’s the most important thing to get right. Mental attitude is everything. You have to manage that racetrack, that racecar, and manage traffic, make no mistakes, hit your marks, go easy on your throttle and brake pedals. You really have to take care of those four Goodyear tires because those are what will take you to victory lane if you take care of them.”

Bowyer’s best moment at Sonoma came in June 2012, when he held off Kurt Busch and Tony Stewart, the latter of who now co-owns Bowyer’s No. 14 Ford with Gene Haas. Bowyer dominated the race by leading 70 of the 112 laps. Defending race-winner Busch was all over the bumper of Bowyer’s car late and got a final shot in a two-lap overtime sprint to the finish. Bowyer raced side-by-side with Busch at the green flag, then cleared Busch and pulled away for the win. Bowyer had to walk to victory lane to celebrate with his crew after his car ran out of gas during the cool-down lap. Stewart passed Busch on the final lap to claim second.

Bowyer’s No. 14 team knows a little bit about Sonoma, as well. In addition to second- and third-place finishes with Bowyer in 2017 and 2018, the crew chief Mike Bugarewicz-led unit won the race with Stewart in 2016 in what turned out to be the last of Stewart’s 49 Cup Series wins.

Bowyer believes that, in addition to his on-track success, the race weekend in California has also become a highlight of the season for everyone in the industry.

“I love that weekend,” he said. “It’s a vacation for everybody involved. It’s a challenging racetrack. I’m good at it. You always look forward to going to tracks you’re good at. We’ve gotten this wave of confidence going at the moment. Hopefully, we can ride off to Sonoma and enjoy some success there, as well.”

Bowyer will drive the Rush Truck Centers Ford Mustang in Sunday’s race. Rush Truck Centers has been the primary partner with the No. 14 team since Bowyer arrived in 2017 and has been with the SHR organization since 2010. The San Antonio-based company, with more than 120 locations and 7,000 employees, has used Bowyer and the team to appeal to NASCAR fans as one way to recruit the technicians it needs to operate the largest network of commercial truck and bus dealerships in the country, with locations in 22 states.

According to Rush Truck Centers, the trucking industry is expected to need 200,000 diesel technicians over the next 10 years to keep up with maintenance demands.

Bowyer arrives in Sonoma after a 35th-place finish June 10 at Michigan International Speedway in Brooklyn, where a lap-130 accident in the 200-lap race ruined what was shaping up to be a top-five or top-10 finish. Bowyer has tallied five-top-fives and eight top-10s in 2019. He’s 12th in points with 11 races remaining before the start of the 2019 NASCAR playoffs Sept. 15 at Las Vegas Motor Speedway.

“It’s that time of year when you start looking at the standings and seeing where you need to be to make the playoffs,” Bowyer said. “Plus, you really want to be on a roll when the playoffs start in September. It all begins Sunday in Sonoma.”

How do you think race strategy will change with the addition of The Carousel?

“I honestly don’t know. I think everybody has been working hard on it and I have been trying to figure out The Carousel. It is going to be a game changer, no question. I don’t know what to think about it. For the last several years, I have looked at that track to be the go-to track. Since the Car of Tomorrow, it really woke up certain tracks, and Sonoma and these road courses have been some of our best products of racing. I think that is a fact. It is an opinion but it is pretty damn close to factual.”

“It’s a fun weekend for everyone in the garage area. It’s almost like vacation, it really is for everybody — the wives, the girlfriends – they all go on wine tours, we get done with practice and have our hands full with a complete mess. Nonetheless, everybody is having a lot of fun.”

How important is this summer stretch to success in 2019?

“The summer stretch is everything and, looking back at our season last year, we’ve got to get better at it. Everybody asks, ‘How are you going to improve from last year?’ And I say it’s that late-summer stretch. We started off great last year and then tapered off in the summer. We have to avoid that this year. You have to get on a roll, especially leading off into the playoffs.”

Bowyer owns career totals of 10 wins, two poles, 77 top-five finishes, 204 top-10s and 2,892 laps led in 484 Monster Energy NASCAR Cup Series races. He also owns eight Xfinity Series victories.
​His most recent Cup Series victory came at Michigan International Speedway in Brooklyn (June 10, 2018).
His most recent Cup Series pole came at New Hampshire Motor Speedway in Loudon (Sept. 16, 2007)
In the June 10 race at Michigan International Speedway in Brooklyn, Bowyer started fifth and raced in the top-five before a lap-130 accident ended his race, leaving him with a 35th-place result.
Bowyer at Sonoma in 2018: Bowyer started 19th but moved to 10th by lap 11. He climbed to fourth before pitting two laps before the end of the first stage. He started the second stage third and held his position until he pitted with two laps to go in the stage and dropped to 18th. He started the final stage third and held his position as the entire stage ran without caution.

All-Time Victory List: With 10 career victories, Bowyer is in a 59th-place tie on the all-time wins list with Donnie Allison and Sterling Marlin. 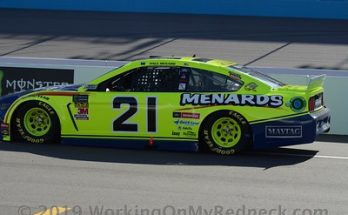