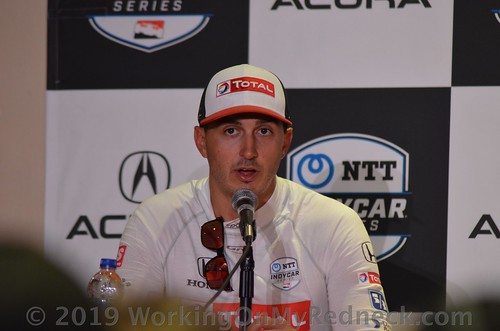 QUALIFYING BROADCAST:     Live on NBCSN and INDYCAR Pass beginning at 6:30-8 p.m. ET on Friday, May 7. Also live on the AAPIRN and www.indycar.com (timing & scoring + live analysis).

TEAM RETURNS TO TMS TO ATTEMPT TO ADD TO POLE AND WIN RECORD
The DXC Technology 600 will mark the 17th event for Rahal Letterman Lanigan Racing (RLL) at the 1.5-mile, high-banked Texas Motor Speedway oval.  The team’s highest start of pole with Scott Sharp came in 2007 and highest finish of first came in 2016 with Graham Rahal.  The team earned another front row start in 2004 when Buddy Rice qualified second.  Overall the team has earned five top-five finishes and 10, top-10’s at the track.

GRAHAM HOPES TO RETURN TO WINNERS CIRCLE AT TMS
In his 11 races here, his best start came in 2012 of third and best finish is his win in 2016.

In 2018, he started 20th and took the opportunity to pit during the first caution for a fire on Leist’s car on Lap 9 after running 19th. This enabled him to stretch his fuel and cycle into the lead on Lap 68 before he made his second stop on Lap 72 and returned to the track in 14th.  He took over 13th when Veach made contact and then into 12th when Newgarden pit due to a tire going down. The field had been watching for tire wear, particularly on the right front and rear, and Rahal reported a vibration on lap 101/248. As the next pit cycle began, he moved up to second by Lap 127 before making his stop on L128. Her returned to the track in 13th place and moved up to eight when a caution came out for Wickens and Carpenter, who made contact on Lap 173. At this point, he was in seventh and a lap down but was waved around before he made his next pit stop on L183.  When the race restarted, he held seventh place and another caution came out for Power and Claman De Melo who made contact as Claman De Melo was passing on the high side. He was in sixth and the team elected to pit for new tires when the pits opened. The race was restarted on Lap 215/248 and Rahal maintained his position until the checkered flag.

In 2017, Rahal drove to a 4th place finish after avoiding many crashes in an action-packed 248-lap race that saw a red flag stop to clear the track after a crash that collected eight cars and later, competition yellows for mandatory pit stops for new tires, among other events.  Near the end of the race, Rahal pitted from fifth place on Lap 225/248 during a competition yellow and mandatory stop but stalled leaving the pits and returned to the track in ninth.  He was in seventh place when Sato and Dixon made contact and collected other cars with four laps to go.  The race ended under caution with Rahal in fourth place.

The June 11, 2016 race was postponed until June 12 due to rain which again postponed the race to August 27 after the field complete 71 of 248 scheduled laps before rain came again.  Rahal had qualified 13th for the race and was in 12th when it was halted.  On August 27, he restarted on Lap 72 and quickly moved to sixth place. He maintained a top-five position the majority of the time except after pitting and never was lower than eighth.  He ran second many times and only led once – the final lap – and won by a margin of victory of 0.0080-of a second in what is the fifth-closest finish in Indy car history and the closest finish at Texas Motor Speedway.

He qualified third in 2012, led 27 laps and looked close to earning what would have been his second series victory but a slight brush of the wall with two laps to go forced him to settle for second place with Service Central Chip Ganassi Racing (SCCGR).

He did not compete in Texas in 2010 during his partial season of competition.  He qualified 12th with Newman/Haas/Lanigan Racing (NHLR) in 2009 but retired in 22nd place after contact.

In 2008, he qualified 18th and finished 11th with NHLR. Rahal aims to post a good result to put the disappointment of crashing with a top-three finish in sight in Detroit Dual 1.

“I’m excited about going to Texas.  We’ve won there before so that makes you look forward to the race more. We struggled there a little bit last year but we were in the hunt at the end of the race. My hope is that we can be a little bit stronger this year. We have the oval maestro Allan (McDonald; race engineer) on the strand and after Indianapolis, where our race car was great, it will be good to go to Texas and see how much of that carries over there. If we can take a couple of things that we learned at Indy to Texas and they work out there too, I think we’ll be just fine.  It looks like it’s going to be a scorcher.” 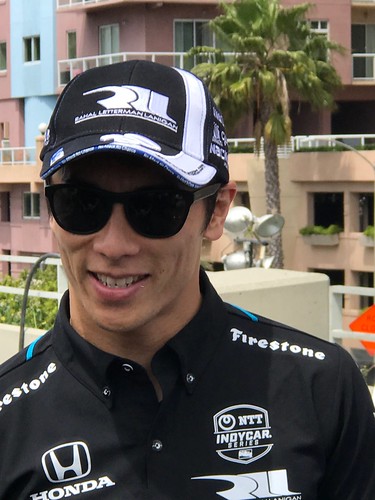 TAKUMA AT TEXAS MOTOR SPEEDWAY
In his 10 previous races here, Takuma has a best start of fourth place, two times (2016 with A.J. Foyt Racing; 2011 with KVRT) and has earned three top-10 finishes with the best being fifth place in 2011 with KVRT.  Last year he started ninth and ran mostly in the top-10 other than pit cycles. The field was monitoring tire wear, particularly on the right front and rear tires, and Sato had to make his second pit stop early for new tires which put him two laps down.  Later in the race he received a wave around during the caution for Wickens and Carpenter and another for the caution for contact between Power and Claman De Melo to be on the lead lap with approx. 35 laps to go while ninth.  After the restart, he passed Jones and then took over seventh when Newgarden served a drive through penalty for jumping the restart.  He took the checkered flag in seventh place.  He is expecting another exciting race at Texas Motor Speedway.

“I’m very excited to see ABeam Consulting as primary sponsor again at Texas. It will be a beautiful blue car. Since we had a strong finish at the Indy 500, I believe we have a strong car for the Super Speedway and I’m looking forward to that and going back to the speedway.  Hopefully we will be strong and can continue to make ground in the title fight. We were able to close a little on the leader in Detroit and want to continue to do that. Texas is always an exciting race.”

POINT STANDINGS AFTER 8 OF 17 RACES
After 8 of 17 races, Takuma Sato is fifth in series point standings with a total of 255 and Graham Rahal is ninth with a total of 175.  Leader Josef Newgarden has 316.