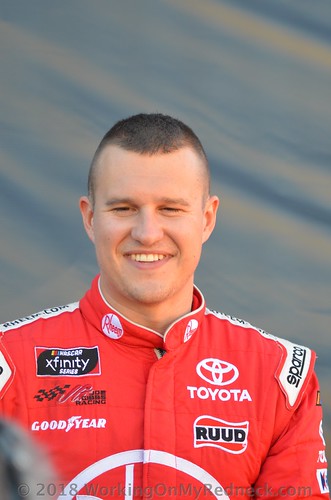 As far as Daytona 500 debuts go Ryan Preece was plenty encouraged if not wholly satisfied with his eighth-place finish Sunday night. He was running top-five, had even pushed into the top-three with a lap to go, but got shuffled out by veterans as the checkered flag flew to close out the overtime season-opener.

In the moments after climbing out of his No. 47 JTG Daugherty Chevrolet Camaro ZL1, he stood on pit road and looked at replays of the race finish on the giant television screen a few yards away.

There were the final two laps for review. Toyota driver Denny Hamlin earned his second Daytona 500 win and on the last lap, it looked as if Preece may finish on the podium in his 500 debut. Instead, a last lap shuffle – so typical of this race – resulted in Preece losing positions as the field took the checkered flag.

But the 28-year old Connecticut native still managed a smile at his top-10 standing by his car and shaking hands with his smiling JTG Daugherty Racing crew.

“Sitting here watching this I’m probably going to get frustrated with myself because there’s a couple things I could have done different to help my chances,” Preece said as he watched the replay. “I was so committed to pushing Joey [Logano], I focused more on him than I did some of the runs I probably should have focused on.

“All in all it’s a good day. It’s an eighth-place finish, a great day for JTG.”

Another replay of the race finish showed again over the speedway as Preece finished speaking with reporters.

“It’s so frustrating watching it,” Preece said, obviously trying to summon a smile. “We were in third place on the white flag lap and got flushed. “

Perhaps in the coming days, the Monster Energy NASCAR Cup rookie will look back at the closing laps as encouragement. His competitors were impressed with the job he did and the crowd seemed to be as well. He was competitive all day, avoided multiple late-race accidents and put himself in position to be a factor as the field approached the most famous checkered flag in NASCAR.

“It was intense as you would expect with the Daytona 500 on the line and I had a great push by the 47 of Ryan Preece and I thought that was cool,” Logano said after climbing out of his car. “We grew up racing quarter-midgets against each other in Connecticut and it just shows that dreams can really come true.

“I’m proud to be racing with him in the Daytona 500. I think that’s super-cool.”

Preece also recognized the opportunity to partner with Logano, a former Daytona 500 winner, and appreciated the restrictor plate lesson.

“I know he does a really good job at these restrictor plate races,” Preece said. “I have a good relationship with Joey. Other than that, he’s really good at making holes. He got me to third and I didn’t do a good enough job blocking and trying to help him move forward to.

“This is a learning experience. Everyone talks about learning and I can tell you multiple things I learned today to help me better my career but also learn what I need to do different the next time I come.”

A two-time winner in the NASCAR Xfinity Series, Preece eventually walked off pit road much more encouraged than frustrated. This is the biggest opportunity of his life and Sunday night was a good start.

“All in all, today’s been about finishing the race, but hopefully gaining people that will work with me in the future. If I can keep on putting that group of people together for maybe the July race [at Daytona] or Talladega [Ala.], I can build that reputation of ‘hey, we can work with him.’

“Then we will run up front more at the end of these races and put ourselves in a good situation.”