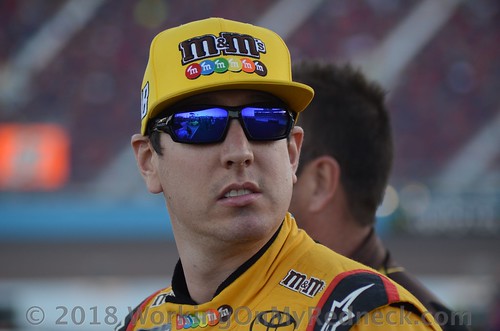 ● The M&M’S Chocolate Bar driver started deep in the field after spinning in the Gander RV Duel qualifying race on Thursday night. However, Busch did not stay in the back for long, as he vaulted to 22nd by lap eight and into the top-15 by lap 15.

● Busch moved all the way up to sixth by lap 16 and to second by the first caution on lap 21.

● After taking four tires and fuel on lap 22, Busch restarted 17th, but he quickly moved up through the pack, sitting within the top-10 by lap 26. He had moved up to the lead by lap 60.

● Busch pitted after the stage break and restarted 16th on lap 65.

● Yet again, the M&M’S Chocolate Bar driver moved up through the field, as he found himself second to fellow Toyota driver Matt DiBennedeto for much of Stage 2.

● Busch came to pit road under caution on lap 108 for fuel and tires, and finished Stage 2 in the 12th spot.

● The M&M’S Chocolate Bar driver pitted for the final time on lap 163 for right-side tires and fuel, and quick service from his M&M’S over-the-wall team vaulted him to the lead.

● Busch lost the lead to Hamlin on lap 173. He held his runner-up spot there before a huge 21-car accident developed behind him, causing the first red flag of the race.

● The Las Vegas native restarted behind Hamlin with 10 laps to go of the scheduled 200 laps, but again, a multicar accident behind him brought out the red flag. This time, however, Busch was in the lead.

● Shortly after the restart, another accident brought out the final yellow of the day, with just two laps to go. That forced the overtime laps, with Hamlin leading and Busch running second.

● On the final restart, Busch let Hamlin move down, setting up the chance for the two to race to the finish. But Busch couldn’t get enough of a push from Joey Logano or Michael McDowell behind him, so he finished in the runner-up spot to Hamlin. JGR teammate Erik Jones came in third. JGR became just the second team in Daytona 500 history to score a 1-2-3 finish.

Can you describe the last few laps and your disappointment with a second-place finish?

“I just was trying to work on a run with the 11 (Hamlin), and you can never trust those behind you, so they all scattered and went around me and I had to work my way back up there. Just wasn’t meant to be today, obviously. It’s frustrating for sure. We had a great car. The guys at Joe Gibbs Racing and everybody at Toyota – I thank all of them, and I feel bad for everybody at M&M’s and Interstate Batteries and Snickers and Skittles and all of those that support me and try to get this 18 car to victory lane. It’s nice to see a teammate win. It’s very, very bittersweet obviously, but I guess we’ll come back and try again.”

Do you wish you would’ve just raced it out on that final restart?

“Yes and no. Again, trying to make sure at least one of us got to victory lane is first and foremost. After that you try to go race it out and see what you can do for yourself and for your team. There wasn’t enough cars out there, really. There was six cars running at the end. I don’t know that anything would’ve been any different really if anything would’ve materialized. I think we all would’ve been stuck side-by-side given if I would’ve been on the outside or something like that. It’s so hard to tell. I don’t know how it would’ve played out, but I’m not going to worry about it.”

Next Up: The next event on the Monster Energy NASCAR Cup Series schedule is the Folds of Honor 500 on Sunday, Feb. 24 at Atlanta Motor Speedway.