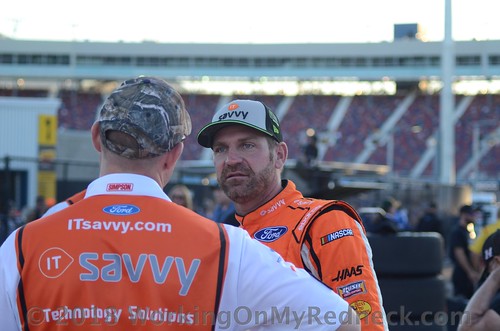 Note: Race extended seven laps past its scheduled 200-lap distance due to a green-white-checkered finish.

● Clint Bowyer held his position in the early going and pitted with Ford teammates on lap 15.

● Bowyer drove back to fourth by lap 24 as Fords ran first through sixth.

● Bowyer dropped to 19th by lap 41, running in the slower of the double-file lanes of traffic.

● Pitted before the stage break and dropped to 25th.

● Bowyer pitted for fuel with other Fords on lap 73, dropping to the back of the field.

● Nearly fell down a lap to the leader, but a caution kept him on the lead lap.

● The No. 14 moved into the top-three in the race’s closing stage and looked to be one of the favorites for victory.

● Bowyer was just a car length ahead of a 22-car accident that stopped the race for 25 minutes with 10 laps to go.

● He restarted fifth with two laps to go, but when he dove to the inside on the backstretch to grab third spot, he clipped another car. The contact sent Bowyer into a spin, collecting several cars.

● The No. 14 team attempted to make repairs but could not continue.

● Denny Hamlin won the Daytona 500 to score his 32nd career Cup Series victory and his second in the Daytona 500. His margin of victory over second-place Kyle Busch was .138 of a second.

● Only 14 of the 40 drivers in the Daytona finished on the lead lap.

“Hey, it is the Daytona 500, I had to go for it. This just sucks, man. We had such a good Rush Truck Centers, Mobil 1 Ford Mustang. This is my best foot forward I have ever had here. We had a shot at it and I took it. I had a big run on the 34 and knew that I had to make quick work of him because in the mirror they were going three-wide and losing their minds so you knew that was going to come down on you. So I decided to lose my mind too.”

The next event on the Monster Energy NASCAR Cup Series schedule is the Folds of Honor 500 on Sunday, Feb. 24 at Atlanta Motor Speedway.