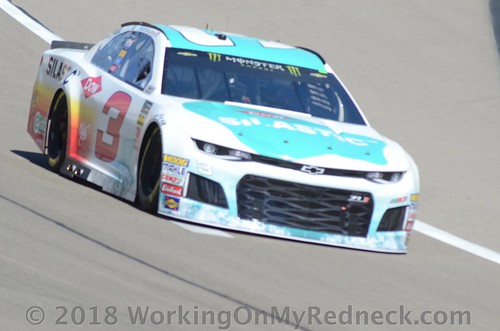 Dressed as he is most days at the race track in a pressed white button-down shirt, Wrangler blue jeans – a team radio typically tucked in a side pocket – and cowboy boots, Richard Childress can hardly walk a foot at Daytona International Speedway without stopping for a handshake, an embrace, a pat on the back or quick pose for a fan’s photo.

His shirt, these days, has a special emblem sewn in – a bright golden 50 on it. This week’s season-opening Daytona 500 (2:30 p.m. ET on FOX, MRN and SiriusXM NASCAR Radio) begins Childress’ 50th year of NASCAR competition.

The number of people from pit road to the NASCAR garage to fans in the infield that want to acknowledge Childress and this milestone is befitting of the NASCAR Hall of Famer he is and – a man who truly worked his way up to the top in the sport, which is a fact seems to be especially appreciated.

At the age of 9, Childress and his little brother Larry sold popcorn and peanuts at their local North Carolina short track, Bowman Gray Stadium – walking miles to the track each weekend as a kid. When older, he eventually earned enough money to buy a car and race. The rest as they say, is history.

And it legitimately is.

“We really liked racing and figured if we come over here and get a job, we could see more racing,” Childress said of his early days at the local short track. “So we sold peanuts and popcorn. Then the next week he [stepfather] said, ‘ya’ll boys can go, but you’ll have to get there on your own.’ So we walked about five miles to get over there to the track. [My parents] would pick us up after because it was late at night. That was my first job in racing.”

After switching his focus from selling snacks to driving stock cars to fielding a team, Childress now boasts six Monster Energy NASCAR Cup championship trophies on his mantle via the late legend Dale Earnhardt and three more Daytona 500 trophies – one each from Earnhardt, Kevin Harvick and Childress’ own grandson Austin, who won his just last year.

His story of success is one of hard work and pursuit – of good timing and good judgment. It reads like a high speed, storybook version of How to Succeed in Business. And it’s something NASCAR fans especially seem to appreciate.

Childress’ family didn’t own a race team. He didn’t start out as CEO of another big company and purchase his operation as a side venture. He fell in love with the sport and courted it for years, intent to find a way to make a living and spend his life there.

Many don’t realize that Childress was a NASCAR Cup driver before he was a team owner – making 285 Cup starts between 1969 and 1981 including eight fulltime seasons. His career best finish was third at Nashville in 1978.  He finished ninth in the 1976 Daytona 500 driving the No. 3 Chevrolet that Earnhardt would make so famous and his grandson Austin drives now.

“We’ve got a lot of owners out there that were businessmen that wanted to be owners and do something fun so they bought a race team and went racing,” said longtime friend and RCR employee Chocolate Myers. “Richard Childress is a little bit different.

“He’s a racer that became a businessman. He is the only owner I know of that for many – many – years, when we went to the race track to test, he was under the car, under the hood, in the gate when we walked in the gate.

“In the world we live in today, I’m up there [at the team shop] a lot. I work there every day and a lot of weekends. I go there and they are closed, except I look over and Richard’s truck is in the parking lot.

“He is dedicated to this sport. He has dedicated his life to it and I think it’s pretty cool to have watched his career go like it’s gone.”

And yet, Childress couldn’t be happier with the way it has all worked out. He has trophies and championships and a NASCAR Hall of Fame honor. But if you listen to him talk about his racing life now, the narrative has changed a bit. He still has the same goal of success and now that comes with the benefit of being a proud grandfather.

The questions he’s getting as he celebrates this special anniversary are similar to what he’s always received. They are obvious and expected. “What is his favorite moment as a team owner” is the prevailing million-dollar ask. And he’s always ready.

“For me, winning the Daytona 500 is one of the most special races you could ever win in your NASCAR career as an owner, driver or crew chief or whatever it is, it’s such a special place,” Childress answers. “To have my grandson win it. … seeing Dale (Earnhardt) win it, I knew what it meant to him to win the Daytona 500 and be able to get that on his resume it was something he really wanted. To see Kevin Harvick win in 2007 …. but to see your grandson win was really, really special. When I’m asked, I say, nothing’s thicker than blood.”

It’s a sentiment that resonates well and loudly with so many NASCAR fans. At Daytona, they surrounded him – two and three deep – hoping for an autograph, a photo, even just a glance or wave. It is NASCAR magic.

“I liked Earnhardt and have stayed with Childress,” said Gerad Hudson, a fan from Mississippi waiting outside the RCR team trailer in the Daytona garage this weekend. “He’s been at it a long time and just seems like a good guy.”

Two important traits among many responsible for making and sustaining one of the sport’s most legendary racing career.

“A lot has changed as far as how the sport goes, the technology and whatnot,” said Andy Petree, a Cup winning crew chief with Earnhardt and now RCR’s Vice President of Competition. “The RCR heritage of winning has really never changed.

“It felt like coming back home when I came back last year, not much different from when I first got there. I knew Richard’s commitment to winning and had not won as many races in the recent past, but still so hungry as hungry as he’s ever been.

“I really hope just to be a big part of the next 50 years. I don’t know how many more we can go through that but I think there’s still some great things coming and I want to be a part of it.”

And Daytona International Speedway – where the 2019 season begins Sunday – Childress is smiling, shaking hands and clearly enjoying the sentimental moments of days past, yet determined and able to create new ones.

“Every time I drive through that tunnel I can’t help but look over at Turn 4 and think about [Earnhardt’s fatal accident] 2001,” Childress said. “But then I also think of the great moments we had and the great races that we had been a big part of and all wins we had with the 125s and 150s with Dale and the Xfinity wins. Just all the great things.

“We had our worst moment in RCR history that day but we’ve had so many great ones and Dale would want us to be talking about the great ones today.”