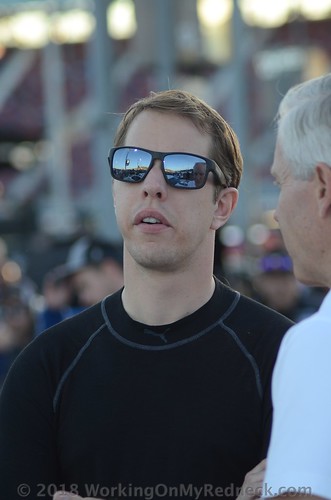 Brad Keselowski’s afternoon in the NASCAR Racing Experience 300 at Daytona International Speedway was cut short by a fault roof hatch.  The driver of the Fitzgerald USA Ford Mustang experienced problems with the device from the opening laps of the race and was forced to park his car was completing 71 of 120 laps.  He was credited with a 37th-place finish in the final rundown.

Keselowski earned the ninth-place starting position during time trials on Saturday morning.  But on lap 3 he radioed crew chief Matt Swiderski that he had issues with the roof hatch. Keselowski was running solidly among the top-10 in the lead draft. The team decided to pit for repairs under the first yellow, which came at the conclusion of Stage 1 on lap 30. He made three stops during the stage caution for repairs which unfortunately dropped Keselowski a lap down when the race went green on lap 37.

The second segment of the race ran caution free and Keselowski took advantage.  He got in position for the free pass back onto the lead lap as the first car one lap down and cycled back to the lead lap when the stage ended on lap 60. He pitted under caution on lap 64 for right-side tires and more repairs.

After his stop, Keselowski’s afternoon gradually soured, when the roof flap above the hatch wouldn’t close. He made an extended stop on pit road, leaving his stall just at the green flag waved on lap 67. As he came up to speed, the roof flap still wouldn’t close and he was forced to the garage area on lap 72 where the Fitzgerald team tried valiantly to make repairs. Unfortunately, the damage was too much and Keselowski was left with a 37th-place finish.

Quote: “I felt like I was back in the ‘50’s running a convertible here on the beach. That was interesting. The roof, escape hatch, whatever it is called looks like there was a defect from the factory on the body and just nothing we could do. The guys tried to fix it but it is in a spot where you can’t get to it and work on it. It is made the way it is made. It is one of those things outside your control and sometimes that is just how things go. I hate it for Fitzgerald and Ford. I know we had a car that could win today. It broke on lap one, Turn 1, and we did everything we could for the last hour or so but it is just not something you can fix.”