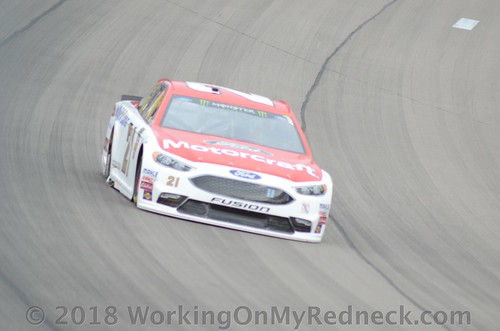 Paul Menard and the No. 21 Motorcraft/Quick Lane team are set to start the Daytona 500 from seventh place thanks to Menard’s third-place finish in the first of two Gander RV Duels on Thursday night.

Menard started the 150-mile qualifying race from sixth position but settled out in fourth place, where he ran until a green-flag pit stop at lap 12 of 60.

Once the pit stops cycled out, Menard was running second to eventual winner Kevin Harvick. Menard lost a spot to third place when the bottom line briefly gained momentum midway through the race.

On the last lap, he made a bold move on second-running Ricky Stenhouse Jr. but came up just inches short.

Nonetheless, it was a cause for celebration in the Ford Motor Company camp as Mustang drivers swept the top three finishing positions, a feat the Blue Oval contingent was able to duplicate in the second Duel.

“We really had a bunch of fast Fords up front, and the Motorcraft/Quick Lane Mustang was really good,” Menard said in his post-race comments. “Ricky [Stenhouse] and I had some fun at the end there. He came over after the race, and we were trying to figure out if we should have gone earlier, later, whatever else might’ve worked.

“I was faster than him through the Tri-Oval, he had me by a bit down the back… at the end I had a little run and I’ll tell you what, I wouldn’t have been able to sleep tonight if I didn’t try at least something there.”

The Motorcraft/Quick Lane team, which also earned eight Stage points in the Duels, now turns its focus to practice sessions on Friday and Saturday as they make final preparations for Sunday’s Great American Race.