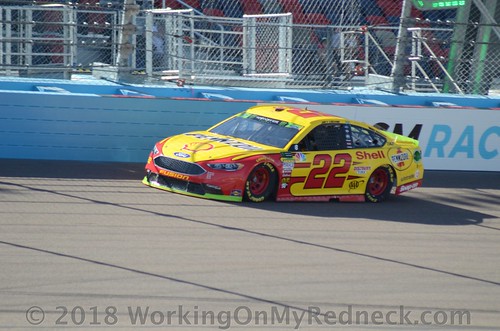 Joey Logano made a daring last-lap pass to bring home the victory in the second Gander RV Duel at Daytona on Thursday night after starting the event third in his No. 22 Shell-Pennzoil Ford Mustang.

In the opening 10-laps, Logano reported the handling of his Ford Mustang had built loose after initially feeling tight, which he attributed to being on the splitter. On lap 12, the team elected to pit with the rest of the Ford competitors, taking fuel and making a chassis adjustment on the left rear.

At lap 23, Logano reported that the loose condition had continued to build after the pit stop, making it difficult to stay on the bottom of the track with the Shell-Pennzoil Mustang. However, at lap 33, Logano reported that the handling of his Ford Mustang had started to come back to him, building slightly tighter where he was originally struggling.

In the closing stages, Logano and teammate Ryan Blaney began experimenting with where they could build runs on the leaders with their Ford Mustangs. Coming to the white flag, Logano and Blaney built the perfect run to propel the No. 22 Shell-Pennzoil Ford Mustang from fourth to the lead into turn 1.

The victory secured Logano a share of the series point lead heading into Sunday’s ‘Great American Race’ where he’ll seek his second victory in the prestigious event.

Quote: It was good teamwork behind me with Blaney.  He did a great job all the way through the race being able to be my wing man all the way through it.  You never know when roles are reversed.  It changes back and forth a lot of times. We happened to be the lead guy and he was able to work with me really well, help me form the run, complete the pass, win the race.  That teamwork is what has made us strong at the speedways.  We have to continue that selflessness all the way through. Sometimes you get to be the lead guy, sometimes you’re the pusher.  Just kind of depends.  Mustangs are fast.  That showed in this race and in the previous race earlier today. I think it showed in the Clash that Fords are doing good. I’m excited about that piece.  Our team is continuing the momentum from the championship.  I think that’s a really good thing. I always say it’s an important race to win obviously, but it’s the heat race.  The feature comes Sunday.  That’s the one that really pays a lot more than this one in a lot of different ways.  I look forward to that.