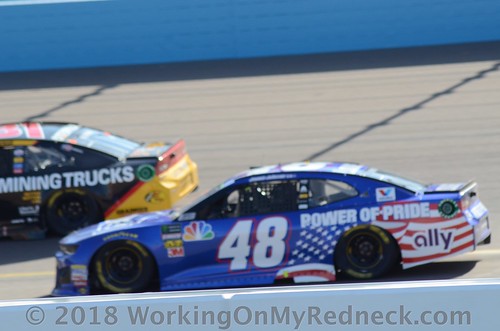 A pair of NASCAR champions created the only on-track incident in the Gander RV Duel #1 at Daytona Thursday night – one of two qualifying races to set Sunday’s Daytona 500 field.

Seven-time champ Jimmie Johnson collided with 2015 champion Kyle Busch 26 laps into the 60-lap race won by Stewart-Haas Racing driver Kevin Harvick. Busch’s No. 18 Toyota spun off the backstretch because of the contact and he was angry with Johnson on the radio immediately thereafter.

It was the second time Johnson has been involved in a racing incident during Speedweeks. He won Sunday’s non-points Advance Auto Parts Clash but made contact with Paul Menard while pulling off a pass for the lead – on what turned out to be the final lap of the rain-shortened race.

While Johnson insisted the incident with Menard was just the result of tight racing on Sunday, he immediately asked his team to apologize on his behalf to Busch mid-race on Thursday.

“Please apologize to the eighteen,” Johnson radioed as Busch drove to pit road for repairs. “I honestly don’t know what happened.”

Given the message Busch was in no immediate mood to forgive. “Tell him I don’t want to hear it,” he told his No. 18 Joe Gibbs Racing team on the radio.

Johnson finished eighth and Busch finished 18th. On pit road after the race, Johnson said he planned to speak with Busch in person as soon as possible.

“And in that whole environment I was wanting to get back in behind Kyle and I think my eyes were in the wrong spot, so I didn’t have a good sense of perception of where I was with Kyle, trying to manage my mirrors and I just got it wrong. I thought I knew where I was with the right front and I just had it wrong.’’

Busch brought up The Clash incident in response to Johnson’s mid-race apology. And he was still in no mood to forgive after climbing out of his car after the race – telling reporters on pit road, “You have to open your eyeballs and see where you’re going, that’s about all I can say.”