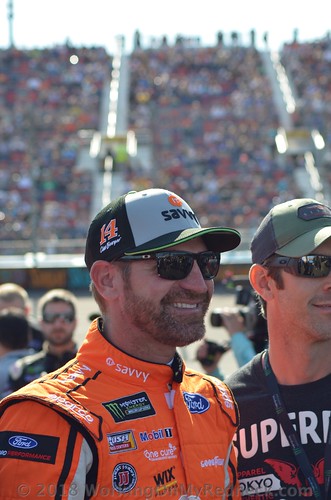 ● Bowyer started fourth in the second Duel and moved to third at the drop of the green flag.

● He inherited the lead during the only pit cycle at lap 13 and never relinquished it until the final lap when Joey Logan passed him for the victory.

● Bowyer led twice for a race-high 41 laps in his Duel race.

● This was Bowyer’s third runner-up finish in 14 career Duel starts.

● Of the 120 laps available between the two Duel races, Harvick and Bowyer combined to lead 85 laps (70.8 percent).

WHAT COULD YOU HAVE DONE DIFFERENTLY AT THE END?

“I don’t know. I guess I could have gone down there and blocked a little bit, but when you are leading the train, you can’t see the runs that are coming behind you. All you can do is hear your spotter telling you that they are coming, but I can’t tell if he pulls out, how fast they are coming or anything else. They came with a big run, and by the time he got to me, I could have gone down there and blocked it and gotten myself wrecked. It was just one of those things. I thought we would still be able to connect and get back up through ‘em. It is what it is. We will start up front for the 500, which is the goal, and the car is still in one piece. The Mustangs are fast. That is two Mustangs winning both Duels, and we did all the right things. Like I said, if that was the Daytona 500 I would have pulled down there and blocked him and tried to do whatever, but he had a massive run. We will just get regrouped and talk about it and get a little better communication there. It wasn’t anybody’s fault, it is just once they pull out like that you can’t tell how fast they are getting on you until they pull out, and he was going pretty fast.”