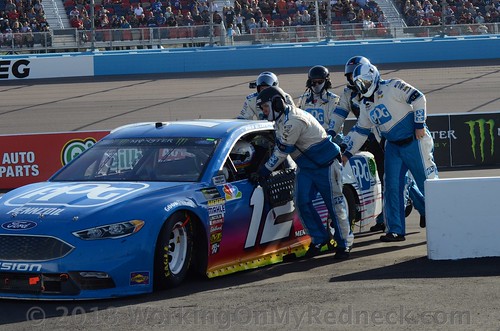 ·       Blaney started eighth and quickly found his way to the rear bumper of teammate Joey Logano’s Ford Mustang on the outside groove. He reported his Menards/PEAK Ford Mustang was a little loose on the entry of the turns. Blaney came to the attention of crew chief Jeremy Bullins for fuel-only and a wedge adjustment on lap 13. He managed to rejoin behind Logano for the remaining 45-plus laps to the finish.

·       The front pack of 10 or so cars remained single file until the final lap when Logano made a successful move for the lead. Blaney attempted to save glued to the rear bumper of his Ford Mustang, but was stalled out by Denny Hamlin. He would eventually come home in the sixth position.

“We were all just kind of hanging out, riding around. I got passed by a couple of cars on that pit stop. Riding in fifth behind Joey [Logano] and we were just waiting to make our move, didn’t really know what anyone else was going to do and I didn’t want to dump him. We waited until last lap entry to Turn One and I was able to push him from fourth all the way to the lead, bad thing was just that I had no one behind me. I almost got to third but the 11 stopped me just so easy. If I would’ve had a push I probably could’ve gotten it done. People don’t want to just watch that train up at the top, so now that we’re through the Duels I’m hoping for some side by side racing in the 500.”