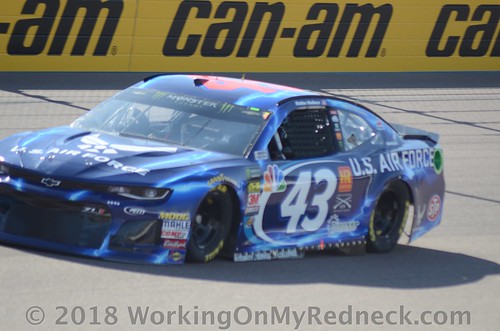 Bubba Wallace made his first trip – ever – to Disney World this week visiting the amusement park – located an hour and a half south of Daytona Beach – with his good buddy and fellow Monster Energy NASCAR Cup Series driver Ryan Blaney.

They rode the famous rides, saw Cinderella’s Castle, watched Star Wars light saber duels – all the things that make the Disney World experience such an iconic part of our culture.

In some ways, it was a perfectly fitting day-off venture. Wallace, 25, returns to what may be his own Magic Kingdom, Daytona International Speedway, for Sunday’s season-opening Daytona 500 (2:30 p.m. ET on FOX, MRN, SiriusXM NASCAR Radio). A year ago on these storied 2.5-mile high banks, Wallace simultaneously made sporting history and made good on a lifetime of personal pursuit – that he was ready and able to make it at NASCAR’s highest level.

Shortly after climbing out of his car, after finishing runner-up in his very first version of NASCAR’s Super Bowl, Wallace attended a press conference where his emotions were raw and overwhelming. His work was the highest ever finish for an African-American in the Daytona 500.

But equally as important to Wallace, his work resulted in a noted and grand arrival – his. He proved that he absolutely belonged in the sport and could compete on the biggest stage door-to-door with the best there is. And succeed.

“I just try so hard to be successful at everything I do, and my family pushes me each and every day, and they might not even know it, but I just want to make them proud,” Wallace said, pausing to wipe away tears of raw emotion as he sat at the interview podium last February. “Second is horrible, but it’s still a good day.

In the days leading up to last year’s Daytona 500, baseball legend Hank Aaron called and Formula One champion Lewis Hamilton tweeted to Wallace – they wished good luck and offered a proverbial pat on the back for the journey he was embarking on. Both Aaron and Hamilton prevailing against the odds too.

After the race and the incredible result, Wallace’s team owner, NASCAR Hall of Famer and the sport’s biggest icon, Richard Petty was all smiles – as proud as he has looked in many years.

Wallace’s mother Desiree Wallace remembers that day well too. Her son paused in the middle of his post-race press conference to embrace and thank her – one of the most moving and emotional Daytona 500 moments in recent memory.

“I look at it like triumph, it’s like we finally made it,” Desiree Wallace said last week reflecting on the moment. “He was like, ‘Mom, you act like I won.’ And I said, ‘you did win baby, you did win.’

“It’s like I felt like at that moment he won the heart of so many people that night, not just the black community but every one of every color. It was very moving.

“I thought back to where he had come from, all the teams, why was it so hard for my son to get sponsorship and then for him just to be in the Daytona 500 then to finish second and be sitting up here on this podium. He did win.”

For most of us in many ways, it could legitimately be considered victory. But for Bubba, it was more positive motivation – not an end result.

But it wasn’t fully satisfying because it wasn’t a win. Yet

And maybe it’s because Wallace is so focused on the big prize that he has been so successful – that’s he’s earned opportunity and to date, managed to capitalize at every level.

He and his Richard Petty Motorsports No. 43 Chevrolet Camaro ZL1 team are optimistic the results will begin to match the effort put forth. They acknowledge, however, that finishing runner-up in his first Daytona 500 set the bar – perhaps unfairly – high for Wallace.

Wallace’s seventh place qualifying effort and runner-up finish at Daytona were the high mark of his rookie season. He added another top-10 at Texas Motor Speedway six weeks after the Daytona 500 and closed out the year with a top-10 in Phoenix just before the season finale. And he led laps in five races.

It all bodes well for Wallace this week. He has a new crew chief in Derek Stamets – who moves into the role after serving as an engineer on the team.

And the one thing that is certain, is there are plenty of people eager to see Wallace succeed.

His mother still remembers the early days when Wallace was often the only driver of color in a race, perhaps even at the race track. Her son’s work in the Daytona 500 last year was a huge step forward in believing that while it is fair and heartwarming to feel good about Wallace’s accomplishments now, soon his skin color won’t even be a topic.

She recalled a race in Richmond, Va. years ago – a race Wallace won – and the crowd that lingered afterward to offer congratulations – many of them African American.

“I told him, this is your purpose to make more of a diverse crowd in NASCAR,” Desiree Wallace said. “That was a pivotal moment for me. Of all these people watching my son race. .. sometimes I would be the only black person around. I’d get a kick out people coming up and asking, ‘are you Bubba’s mom?’

“That was a pivotal moment for me and I thought, maybe God is going to use him for a bigger stage.

Wallace smiled and acknowledged the good will and shared a story from his own recent vacation. He and his longtime girlfriend Amanda and their friends were sitting in the airport in Hawaii waiting at the gate to make their return trip to North Carolina.

“I was sitting there and had a Petty [team] pullover just sitting on top of a bag,” Wallace said. “A Hawaiian guy just walks up and says, ‘Are you Bubba Wallace? I’m a big Bubba Wallace fan, my son and I go to a bunch of races.

“I mean, we’re in Hawaii and I get noticed? Pretty cool.”

Wallace should get used to it. Young, well-liked, talented and poised, Wallace is exactly the front man the sport is excited to promote.

While it’s impossible to “call his shot” and promise another thrilling finish in Sunday’s Daytona 500, Wallace does insist that he couldn’t be more prepared for the spotlight’s glare, the trophy hoist, the feeling that’s he’s come a long way and made it. And for sure, he is trying to enjoy the journey.

“Coming into the season last year we were like there is no way in hell that we would finish second in my first Daytona 500 attempt,” Wallace recalled. “I thought I would go out there and cause ‘the big one’.

“You try your hardest not to, but it’s there. So, to be able to do that and to be able to come out almost on top pushing the No. 3 [Austin Dillon] to Victory Lane was pretty cool, pretty special.

“A lot of people hyped this story up as coming back as ‘oh you are going to do it again’. It’s like, let’s pump the brakes, let’s get through the rest of the week and let’s make it to lap 199, let’s stop and have a break and do an interview on that last lap and see if we have a shot.