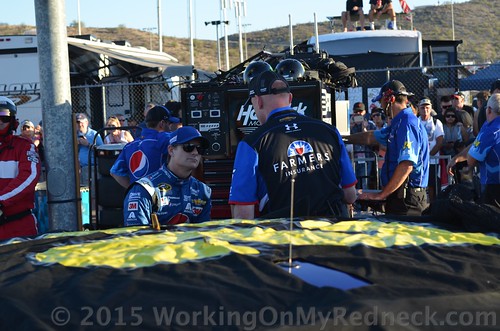 Three legendary drivers and two of stock car racing’s most influential owners were honored with well-deserved induction into the NASCAR Hall of Fame on Friday night.

In one distinct way, the 10th Hall of Fame class is unique. Either as owners or drivers, all five members of the class competed against each other at some points in their careers.

Four-time Monster Energy NASCAR Cup Series champion Jeff Gordon headlines a 2019 class that includes two drivers whose careers—and tragic loss of life –are inextricably intertwined. Alan Kulwicki, the last privateer to win a Cup championship, and Davey Allison, both played key roles in the 1992 title race, before both passed away the following year as the result of aviation accidents.

The Hall also welcomed reigning Monster Energy NASCAR Cup Series champion owner Roger Penske, as well as Jack Roush, whose drivers won back to back Cup titles in 2003 (the last year of the season-long scoring system) and 2004 (the first year of the postseason Playoffs).

After an introduction from fellow California Cup driver Kyle Larson, team owner Rick Hendrick, along with Gordon’s son Leo and daughter Ella, presented the final induction honors of the night for the newly inducted Hall of Famer, who won 93 Cup races, third most all-time.

“What a special evening,” Gordon said. “So honored to be here surrounded by friends, family, fans and many people that have worked very hard behind the scenes for me over the years. Thank you!

“I was told I have about eight minutes to give my speech. I’m not exactly sure if it’s going to take six, 12 or what, but, honestly, no amount of time would be enough to thank everyone who helped me get here to this stage tonight.”

Gordon then proceeded to thank those who played key parts in his storied career, from Hendrick to three-time champion crew chief Ray Evernham to stepfather John Bickford to his wife Ingrid and his children.

“Raising a family is similar to racing – some days you’re hanging in the back, hanging on tight, holding on and hoping a caution falls at any second,” Gordon said. “Other days you’re pulling into victory lane celebrating and proud as you can be.

“I’m so thankful and lucky to have the love of my life and two amazing kids by my side every morning when we start our engines and every night when the checkered flag waves.”

In a career that has encompassed four decades, Roush has accumulated 137 victories in each of the Cup and Xfinity Series while nurturing the career of fellow NASCAR Hall of Famer Mark Martin, a 40-time winner in NASCAR’s premier series.

It was Martin who presented Roush with his Hall of Fame ring, after an introduction by Ricky Stenhouse Jr., who won back-to-back NASCAR Xfinity Series titles under the Roush Fenway Racing banner in 2011 and 2012.

“When I announced my plan to start a NASCAR Cup team in January 1988, few, if any, knowledgeable fans and even fewer Cup team personnel would have given me favorable odds of surviving for more than three decades, as I stand before you tonight,” Roush said in his induction speech.

“Were it not for Mark Martin’s ambitions and commitment, and the timely advice and support of Banjo Matthews, Bobby Allison, Glen and Leonard Wood and counselor John Cassidy, I would not have survived long enough to have earned even a footnote in any chronicles of the sport.”

A fiercely competitive and singularly driven late model racer from Wisconsin, Kulwicki followed Roush into the NASCAR Hall of Fame. Winner of the 1992 title in the most closely contested championship race before the debut of the Playoff format, Kulwicki overcame a 278-point deficit in the final six races of the season to beat Bill Elliott and Allison for the championship trophy.

True to his calculating, mathematical approach to racing, Kulwicki won the title by leading 103 laps to 102 for Elliott, the race winner, in the final race of the season at Atlanta. The five-point bonus for leading the most laps propelled Kulwicki to the crown.

“It’s a real pleasure and honor for me to be here tonight,” Sabates ad-libbed. “Alan Kulwicki was like family to me—and this is probably the closest I’ll get to the Hall of Fame stage.”

The winner of 19 Cup races, Allison was leading the championship standings by 30 points over Kulwicki entering the final race of the 1992 season but contact from Ernie Irvan early in the race ended his title hopes.

Nevertheless, Allison leaves a legacy on special talent that includes a second-place finish to his father and NASCAR Hall of Famer Bobby Allison in the 1988 Daytona 500 and a subsequent victory in the Great American Race in 1992.

“Although he was tragically lost too young, this bedrock of the Alabama Gang left an everlasting legacy,” driver Regan Smith said in his introduction of Allison. “He always dreamed of beating his father Bobby to the finish line because to be the best, you had to beat the best.

“Today he joins him in the NASCAR Hall of Fame.”

Penske numbers Cup championships in 2012 (with Brad Keselowski) and 2017 (with Joey Logano) among his myriad accomplishments in motorsports. In addition to his record 17 Indianapolis 500 victories—the most recent with driver will power last year—Penske has amassed 111 victories at NASCAR’s highest level and another 68 wins in the Xfinity Series to go with four owner’s championships.

Penske’s three Cup drivers—Logano, Keselowski and Ryan Blaney—provided the introduction and son Greg Penske completed the induction of his father, with Greg Penske noting that his father known to the family as “Mr. Fun.”

“I guess tonight I won’t be Mr. Fun—I’ll be the Captain,” Penske quipped in his acceptance speech, referring to his other, more well-known moniker.

“Racing has been a part of my life almost as long as I can remember. It is the common thread that is woven throughout all of our Penske businesses. Racing is simply who we are.

“The lessons we learn in racing help drive our success in business, and the exposure provided from NASCAR is a source of pride that builds our brand and our entire organization.”

NASCAR vice-chairman Mike Helton noted that Hunter, who lost his battle against cancer in 2010, was “known for his wit and wisdom. He had a warm style, but he was direct, and he motivated everyone he touched to be better.”

At the NASCAR Hall of Fame dinner that preceded the induction ceremonies, long-time NASCAR writer, broadcaster and author Steve Waid was recognized with the Squier-Hall Award for NASCAR Media Excellence.