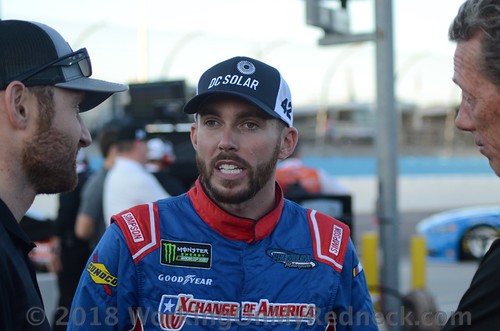 Coming off a well-deserved 10th place points finish in the NASCAR Xfinity Series, Alva, Florida native Ross Chastain will once again drive the No. 4 JD Motorsports with Gary Keller Camaro SS for 30 races in the 2019 season. Chastain, who earned his first career win in the series last September in Las Vegas, will return to the family team based in Gaffney, South Carolina.

“We here at JD Motorsports are looking forward to having Ross back in the No. 4 in 2019. He has shown his ability to wheel a racecar time and time again while competing against some of the top teams in the sport. I am excited to see how far the improvements made in the off season will take the No. 4 car this year.” said team owner, Johnny Davis.

Blake Koch, who was originally slated to drive the No. 4, decided earlier this year to focus primarily on overseeing the success of his growing company, Filter Time. Blake’s decision ultimately leads to him stepping away from the series, and all of us here at JD Motorsports with Gary Keller wish him the best moving forward.

RM Parks, Inc, EZ Angus Ranch and Mc Divitt Sign Company will jump on board as official sponsors of the No. 4 for all five of the West Coast races within the season. According to RM Parks, Inc. president and CEO, Tim Callison, “We are excited to be part of Ross Chastain’s winning team and are looking forward to another amazing season with JD Motorsports!”  More sponsorship announcements are coming soon, so stay tuned for further updates.

The NASCAR Xfinity Series season kicks off on Saturday, February 16th, with the running of the NASCAR Racing Experience 300 at the Daytona International Speedway in Daytona Beach, Florida. Chastain’s season with JD Motorsports will begin the following weekend during the Rinnai 250 at the Atlanta Motor Speedway in Hampton, Georgia. Be sure to tune into FOX Sports 1 on Saturday, February 23rd to see Ross back behind the wheel of the No. 4 Camaro SS.