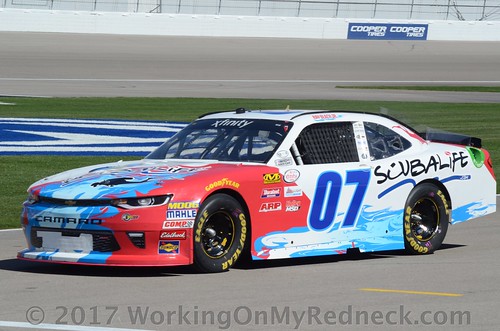 SS Greenlight Racing announced today that Ray Black, Jr. will once again pilot the No. 07 Chevrolet Camaro for Bobby Dotter in the NASCAR Xfinity Series (NXS).

Black raced a partial season last year for BJ McLeod Motorsports, by competing in ten Xfinity Series races throughout the 2018 campaign. He also made his Monster Energy Cup Series debut at Daytona for Rick Ware Racing in July, where he started in the 39th position and finished 16th. Black will now once again compete full-time for Bobby Dotter and SS Greenlight Racing. Black ran full-time for SS Greenlight Racing back in 2016 and shared the ride in 2017.

“When the opportunity arose for me to return to SS Greenlight Racing, I knew it was something I couldn’t pass up,” said Black. “Bobby Dotter has done so much for me over my career, so it definitely feels like a homecoming for sure.”

“We are all really excited to have Ray back in our stable for 2019,” team owner Bobby Dotter stated. “Ray has been part of our team for several years, so it’s exciting to have him back running full time in my No. 07 Camaro. I am confident that with Ray’s experience, we are going to have a really positive showing with this team.”

Long-time team member Jason Miller will serve as crew chief to Ray Black Jr. on the No. 07 Chevrolet Camaro. “I’m excited to be working with Ray again,” mentioned Miller. “We have worked together since the beginning of his career and have a lot of history together. Ray is one of those guys who is always going to get you the very most out of the car. It makes my job easier when you have someone like Ray, who can tell you exactly what he needs the car to do. It’s going to be a fun year for sure.”

Isokern Fireplaces & Chimneys and ScubaLife will serve as a joint primary sponsorship for Ray Black in the 2019 season. Isokern will be on board for the season opener at Daytona International Speedway.