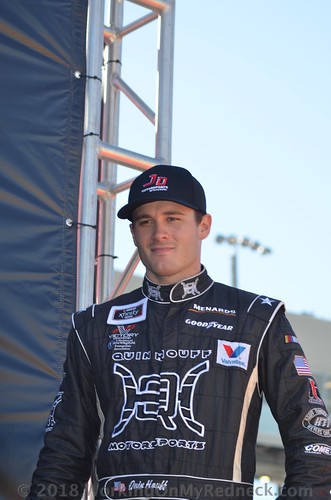 For a youngster who grew up working in the shop of the family trucking business, Houff had big dreams. The Virginia native fell in love with racing as a youngster and made it his goal to race his way into the top level of the sport.

“I’m so excited to be able to make my Monster Energy NASCAR Cup Series debut at ISM Raceway in March,” Houff said. “I cannot thank Jeff Dickerson and T.J. Puchyr from Spire Motorsports enough for the opportunity to make my dream a reality. There are thousands of drivers who make racing on Sundays their goal. To be one of the few drivers who get to realize that goal is a true blessing. It’s humbling for me to compete at the pinnacle of the sport, but it’s also a testament to all those who stood behind me to this point and those who will continue to do so in the future.”

Houff first landed on the radar of industry insiders through his success in the CARS Response Energy Tour where he piloted a super late model to multiple wins before moving to the ARCA Racing Series in 2017. Houff has 10 NASCAR XFINITY Series starts to his credit with a career best 12th-place finish coming at Iowa Speedway that same year.

“We’re eager to get to Phoenix and have Quin in the car for the first of his races with us this season,” said Dickerson. “Quin was very good at finishing races and keeping his equipment intact. That’s one of the most important things to do in order to learn and grow.”

All of this happened while he continued to work at his family’s trucking business as a mechanic, servicing the rigs that carried clients’ freight back and forth across the country.

Houff knows the learning curve will be steep. Plans for 2019 call for Houff to be in the seat of Spire’s No. 77 machine for roughly half of the MENCS schedule with specific races following his debut to be announced at a later date.

“As a rookie, I’m hoping to learn as much as I can about the cars and how they handle and react,” Houff continued. “I’m looking forward to learning some new tracks as well as revisiting some others. I’m also anxious to see how these long, 400- and 500-mile races play out. I just want to go out there and put the car where it needs to be because this is the top of the sport and I have to learn how these guys race in order to become a better driver myself.”