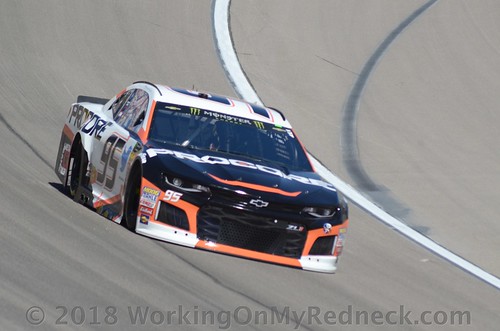 Leavine Family Racing (LFR) is proud to welcome back Dumont JETS as a primary sponsor with the organization for the 2019 Monster Energy NASCAR Cup Series season.  The Wilmington, Delaware-based company is a full-service aircraft charter, sales, maintenance, and parts organization who made the foray into NASCAR during the 2018 season.

Dumont JETS has three primary sponsorship events slated for the 2019 season after they experienced tremendous success from the partnership their rookie season.  The sponsorship, which came about initially because key members of the company were fans of Kasey Kahne and NASCAR, sparked from fandom into a successful overall marketing strategy for the company.

The benefits from their sponsorship are less traditional than a simple consumer-facing angle since the typical NASCAR fan is not the company’s consumer base for jet cards and retail charter sales.  Connecting the Dumont JETS corporate aviation world with NASCAR was a leap of faith for the organization, but they were able to develop connections with Fortune 500 companies as well as additional race teams, they earned name recognition on the car throughout the season, and were able to realize first-hand the many benefits that a NASCAR sponsorship can provide.

“We are looking forward to Matt DiBenedetto piloting the Dumont JETS Camry this upcoming season,” said Amber Martin, Director of Corporate Relations for Dumont GROUP.  “We at Dumont JETS are very pleased of our partnership with Leavine Family Racing. One might rightly suggest that an aircraft charter company and a NASCAR race team make a strange pair. However, the principles at LFR worked to understand our business, and how the unique B2B environment in NASCAR could deliver value for our organization.”

“Dumont JETS returning for the 2019 NASCAR season illustrates that businesses do in fact see value in NASCAR” said Jeremy Lange, Vice President and General Manager of LFR.  “We are excited about introducing their jet services to more people within the sport and increasing the return they see from their partnership with LFR. We have some fun activation concepts we are working on with them and are appreciative of the support they are committing to LFR and the sport as a whole.”

Dumont JETS will make their 2019 debut aboard the No. 95 Toyota Camry for their first primary sponsorship of the season at Las Vegas Motor Speedway on Sunday, March 3, 2019 in the Pennzoil 400.  The No. 95 will sport the Dumont JETS paint schemes at Dover International Speedway in October as well as ISM Raceway in November.

Leavine Family Racing is an organization competing in the Monster Energy NASCAR Cup Series focused on growing competitively and providing results-driven partnerships for its sponsors. The single-car team was founded in 2011 by Bob and Sharon Leavine, two individuals who are passionate about NASCAR and started the team to make a positive impact on the sport and community. Matt DiBenedetto will pilot the No. 95 Toyota Camry for the team starting with the 2019 season. In alliance with Joe Gibbs Racing and Toyota Racing Development, the team operates out of their Concord, N.C.-based race shop with a veteran group of racing personnel driven by their desire for progress. For more information, please visit www.LFR95.com.