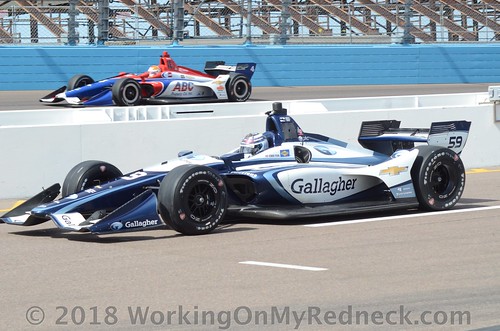 It’s rare that a team joins the NTT IndyCar Series with two drivers. It’s rarer still that it returns for a second season with the same two drivers and their primary sponsors. Trevor Carlin is proud of that fact.

Carlin announced Monday that Max Chilton (shown above) will return for the entire 2019 season with Gallagher as the primary sponsor on the team’s No. 59 Chevrolet, and Charlie Kimball will return on a part-time basis in the No. 23 Chevrolet with sponsorship from Novo Nordisk.

“We’re very happy that we kept both drivers and both sponsors for the second year,” Carlin, the team principal and namesake, said. “We’re very pleased that Gallagher has shown faith in us and realized the potential of the team, even though we didn’t really show it properly last year. They believe in us and they have confidence in us going forward. The same goes for Novo Nordisk and their longtime support for Charlie — it’s been such a privilege for us to become a part of their 11-year relationship. We’re one of the first new teams in a long, long time that has entered INDYCAR and done a full season with two cars and to carry both of those drivers forward for a second season. We’re pretty proud of that.”

It will be Chilton’s fourth season in the NTT IndyCar Series with Gallagher, a global insurance brokerage, risk management and consulting services firm. Since his debut season in 2016, Chilton has 50 starts, eight top-10 finishes and 76 laps led. His most memorable effort was a fourth-place finish at the 101st Indianapolis 500 in 2017, when he led a race-high 50 laps.

“I couldn’t be happier to formally announce that Gallagher will be back for the 2019 season partnering with myself and Carlin,” Chilton said in a statement released by the team. “Gallagher and Carlin are like family to me, and I’m excited to see what we can do together building on both partnerships. Our first year together as an INDYCAR team had its ups and downs, but the potential and growth that we showed as a team was obvious to everyone.”

Carlin, whose home base is in England but whose INDYCAR team is housed in Florida, has enjoyed massive success in an array of motorsports disciplines worldwide, developing some of the sport’s top open-wheel drivers. The outfit impressively captured the F2 team championship in 2018 – in its first year competing in the “Indy Lights of the F1 ladder.” Just as impressive, the team founded in 1996 notched its 1,000th podium finish in all forms of motorsports.

Among those who have raced somewhere around the globe with Carlin in the junior ranks are NTT IndyCar Series drivers Will Power, Josef Newgarden, Takuma Sato, Robert Wickens, Ed Jones, Conor Daly, Jordan King, Jack Harvey, Colton Herta and Marcus Ericsson. And, of course, Chilton and Kimball.

Chilton won races with Carlin in Formula 3 and Formula 2 (formerly GP2 Series) before moving to One World. Last year, in Carlin’s first season in the NTT IndyCar Series after four seasons fielding cars in Indy Lights, Chilton had a top finish of 11th in the second race on Detroit’s Belle Isle and a top start of sixth at Mid-Ohio. He finished 19th in points. Kimball had six top-10 finishes, including a best of fifth at Toronto, to finish 17th in the final standings.

“We’re pretty pleased as an organization,” Carlin said. “The season went really, really well. We had no reliability issues. We ran every lap we could. We were lacking pace compared to our competitors, but what people outside INDYCAR don’t realize is just how competitive it is. We run in five or six different categories around the world, but if you look at INDYCAR in 2018 and compare pole position with P22, most of the time you’re talking about 1.2 seconds separating the entire field. The competition is absolutely fierce.”

Chilton’s contract will include all 17 races in the 2019 season. Kimball’s deal will be part time; Carlin will disclose details in the near future. The goal going into 2019 is to improve on the team’s 2018 rookie season in INDYCAR.

“We have to be realistic and realize that INDYCAR is the most competitive championship in the world currently, with the best drivers and best teams in it,” Carlin said. “We’d be very naive to think we could be always running at the front. Our target is to keep improving. Constant improvements is our company motto.”

Chilton has a long history with Carlin, including Formula 3 and GP2. In 2015, after two years in Formula 1 with Marussia F1, Chilton moved to Indy Lights with Carlin. The following year, he joined the IndyCar Series with Chip Ganassi Racing before reuniting with Carlin last season.

“Max is one of those drivers you can always rely on to do a good job,” Carlin said. “The big thing for the team is to get the car exactly how he wants it, and then he can really show his performance. Obviously in 2018 everything was new and fresh to us, so there were times when the car was a bit out the window and it was hard for Max to show his true worth. Now we’ve had some time to spend with the cars and do some development and testing, so we’re confident that us as a team can move forward. That will help Max deliver the performance we know he’s capable of.”

As for Carlin? He’s looking forward to more.

“You can’t underestimate what we’ve managed to achieve,” Carlin said. “Long may it continue.”