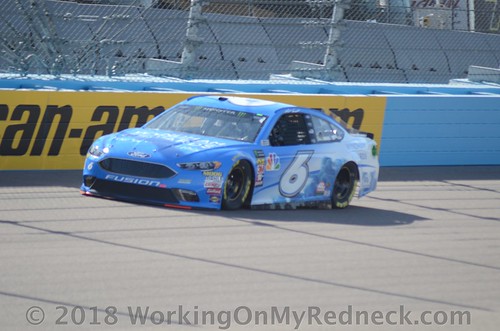 There’s something to be said about an 18-year veteran in this day and age of NASCAR. Especially one with a Daytona 500 win, Brickyard 400 win, and Rookie of the Year title under his belt. But with anything new comes a learning curve, one Ryan Newman is excited to embrace heading into his first season in the No. 6 Ford Mustang for Roush Fenway Racing.

New faces, new leadership, a new shop and a new ride. For Newman, everything is new heading into the 2019 season. The 2008 Daytona 500 Champion recently caught up with SiriusXM’s Claire B. Lang on ‘Jack’s Garage’ to talk through the transition.

“It’s just like a toolbox,” Newman said. “The shop has to have everything tool wise that it needs to be successful. And that’s not just people, that’s the parts, the way it’s organized, the assembly area, all the things that create flow that make it easier for people to work. That’s what you ultimately want is to have good people that can do an easier job and make that end result better.”

Historically, Newman’s end result has been fairly consistent, finishing in the top-10 in the Cup series points standings on seven occasions. The South Bend, Indiana, native has eight NASCAR Cup playoff berths since its inception in 2004, and finished runner-up in 2014. With 18 career wins, Newman is poised for 2019 and what it has to hold for the No. 6 team.

“I feel like I’m as good if not better than I’ve ever been as far as my abilities behind the wheel,” Newman said. “My experience is more than most – and I’ve got a lot of good experiences and a lot of bad experiences – but all those things together make you a better race car driver. I look forward to being able to use those experiences to take this aero package – and lack of horsepower compared to our past – to be successful.”

Like Newman, crew chief Scott Graves is new to the No. 6 team in 2019, despite spending a large portion of his career with Roush Fenway from 2006-15. Graves most recently won an Xfinity Championship with Daniel Suárez in 2016, and prior to that led Chris Buescher to the 2015 title. Combined, the duo has 34 wins across NASCAR’s three major touring series.

“For me it’s about the opportunity to move to a new team and make myself better,” Newman added. “I started off my career with lots of poles and lots of wins, and I want to finish it with lots of poles and lots of wins. It’s a great opportunity to team back up with Ford where I started. We obviously saw how strong they were last year with (Joey) Logano winning the Championship, so they’ve created a big racing family and I’m excited to be a part of it.”

Newman’s journey under 2019 NASCAR Hall of Fame inductee Jack Roush begins next month at the World Center of Racing, Daytona International Speedway. While it will be a different look and different feel, it’s one Newman is looking forward to and having fun with.

“There’s going to be some learning curves for myself and other guys on the team,” Newman said. “It’s all about being new, but at the same time, I look forward to that and that’s something that’s fun for me. It should be a lot of fun to get started and hopefully those last 10 races are the most fun I’ve had in a long time.”