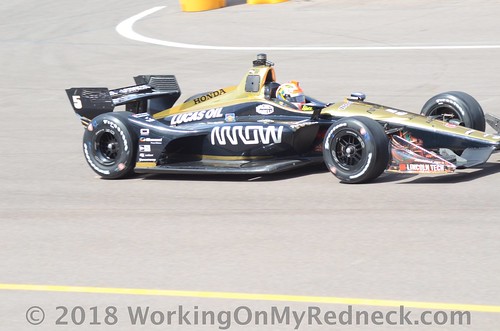 The three Dallara-Honda Indy cars of James Hinchcliffe, Robert Wickens and Marcus Ericsson were on display this morning at the home of the Denver Nuggets, Colorado Avalanche and Colorado Mammoth. The Nos. 5, 6 and 7 displayed the team’s new signature black and gold previously seen on the Honda driven by Hinchcliffe since 2015. Longtime fans of the team will notice the chrome on the cars has changed to a futuristic, sleek matte finish.

While Wickens will not compete in the 2019 IndyCar Series season as he continues his rehabilitation and recovery after an accident during the 2018 season, the No. 6 Arrow Electronics Honda was on display to signify the team is keeping the No. 6 car ready and available for the Canadian whenever he is able to and wants to return to racing.

The Arrow SPM team also continues its technical alliance with Meyer Shank Racing and its No. 60 AutoNation/SiriusXM Honda driven by Jack Harvey although the car was not on display for today’s announcement. Arrow SPM will continue to provide full-time engineering and technician staff to see the car through from the initial build to on-track performance.

The relationship with Arrow began with SPM co-owner Sam Schmidt in 2014 through their collaboration on the semi-autonomous motorcar (SAM car). That was the same year Schmidt, a quadriplegic, drove the SAM car over 90 mph and 100 mph on consecutive days using the Arrow technology embedded in the car. The following year in 2015, the electronics company joined the race team as a primary partner on Hinchcliffe’s No. 5 car; the number a nod to the company’s “Five Years Out” vision that is about “guiding innovation forward to help you create a better tomorrow.”

To watch the entire unveiling from this morning, please visit the Arrow Schmidt Peterson Motorsports’ Facebook page by clicking HERE.

Mike Long, Chairman, President and CEO, Arrow Electronics
“Our relationship with Schmidt Peterson Motorsports has become synonymous with innovation, courage and perseverance. We are very driven to bring our technical expertise and resources to SPM to help them win races and championships for many years to come.”

Sam Schmidt, Co-Owner, Arrow Schmidt Peterson Motorsports
“For me, this announcement is nothing short of a lifelong dream come true. Mike Long and the entire team at Arrow first had vision to create a system that enabled me to get behind the wheel after 16 years of paralysis which, in and of itself, has changed my life and the lives of millions worldwide. Now, by becoming our team title partner, they have given us the resources to fulfill another lifelong dream to win the Indy 500 and a championship in the IndyCar Series.”

Additional photos for media use can be found HERE.

About Arrow Electronics
Arrow Electronics guides innovation forward for over 150,000 of the world’s leading manufacturers of technology used in homes, business and daily life. With 2017 sales of $26.6 billion, Arrow develops electronics and enterprise computing solutions for customers and suppliers in industrial and commercial markets. The company maintains a network of more than 345 locations serving over 80 countries. Learn more at FiveYearsOut.com.

About Arrow Schmidt Peterson Motorsports
Established in 2001 and owned by former IndyCar driver Sam Schmidt and Canadian businessman Ric Peterson, along with title partner Arrow Electronics which has partnered with the organization since 2015, Arrow Schmidt Peterson Motorsports (Arrow SPM) currently competes in the IndyCar Series. With a storied history in the Indy Lights Series with over 70 wins, over 70 pole positions and seven championship titles, the Indianapolis-based team has also found success in IndyCar with six wins, two Indianapolis 500 pole positions and five poles claimed overall, as well as three top-five finishes in the championship points standings. For more information, please visit spmindycar.com.