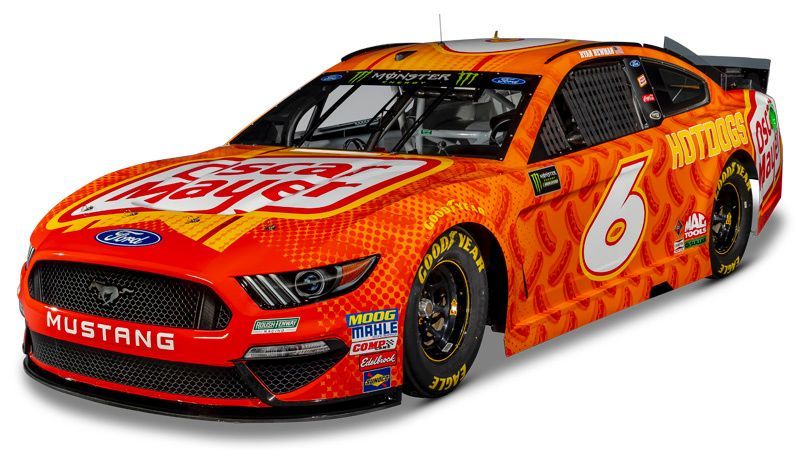 Oscar Mayer will debut as a 2019 sponsor of the No. 6 Oscar Mayer Ford Mustang at the historic Daytona 500 on February 17, with driver Ryan Newman and Roush Fenway Racing.

The race will mark Newman’s Roush Fenway debut behind the wheel of the Oscar Mayer No. 6 Ford, and with NASCAR’s winningest owner Jack Roush, a two-time winner of the Great American Race (2009, 2012).

“We’re honored to be a season-long sponsor of driver Ryan Newman and Roush Fenway Racing,” said Matt Riezman, Associate Director for Oscar Mayer. “We have big plans to support the sport and the No. 6 Oscar Mayer Ford Mustang this year and can’t wait to share our love for tasty Oscar Mayer bacon, cold cuts and hot dogs with NASCAR fans.”

Oscar Mayer will return as the primary partner on the No. 6 Ford at Phoenix on March 10 and will be featured as the primary sponsor on a number of races throughout the year. In addition, the iconic brand will serve as an associate partner on the No. 6 for the entire season. In each race, the No. 6 Ford Mustang will sport a different design scheme that celebrates Oscar Mayer’s quality offerings across bacon, hot dogs and cold cuts.

“A win in the Daytona 500 means so much in our sport,” added Newman, who will make his 18th start in the Great American Race. “I’m fortunate to have one Daytona 500 win under my belt and make no mistake, the goal is to put this No. 6 Oscar Mayer Ford in victory lane at Daytona next month.”

Newman, a native of South Bend, Indiana, becomes the fifth driver to pilot the No. 6 for Roush Fenway. The No. 6 Ford has visited victory lane 36 times, captured 41 poles and led over 11,400 laps under the Roush Fenway umbrella.

Newman has led over 4,800 laps and his 51 poles are the ninth most in NASCAR history. He was named the Cup Series rookie of the year in 2002 and won the 2008 Daytona 500 and the 2013 Brickyard 400. He has finished inside the top 10 of the final Cup standings on seven occasions, including a second-place finish in 2014, and has qualified for the NASCAR Cup playoffs on eight different occasions since its inception in 2004. He was also named NASCAR Driver of the Year in 2003. All time at the World Center of Racing, Newman has 10 top-10 and five top-five finishes.
Oscar Mayer historically served as an associate partner at Roush in the early 2000s and was featured on both Kenseth’s No. 17 Ford and Kurt Busch’s No. 97 Ford, when NASCAR Hall-of-Fame owner Jack Roush led his stable to back-to-back Cup championships in 2003 and 2004.
TIL NEXT TIME, I AM STILL WORKING ON MY REDNECK!