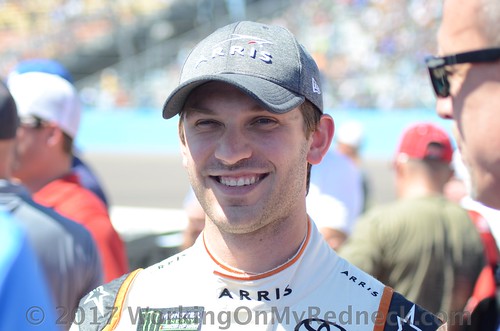 Daniel Suarez celebrated his 27th birthday Monday by announcing that he will be joining the Stewart-Haas Racing team for the 2019 Monster Energy NASCAR Cup Series season.

Suarez, a native of Mexico and heralded graduate of NASCAR’s Drive For Diversity program, makes the move to the No. 41 Haas Automation/ARRIS Ford Mustang after spending the first two years of his Cup career at Joe Gibbs Racing. He also won the NASCAR Xfinity Series title for the JGR team in 2016.

With a laugh, Suarez told the national media Monday that now he will no longer need to “hide” or be undercover at the SHR shop where he has been a frequent visitor since the end of the 2018 season. Suarez joins teammates Kevin Harvick, Clint Bower and Aric Almirola at the SHR operation and Billy Scott will be his crew chief on the No. 41 Ford.

“It is one of the most super opportunities that I believe happens once in a lifetime,’’ Suarez said. “To have the opportunity to join top caliber operation like Stewart-Haas Racing.

“I have great teammates,’’ he continued, “…. It’s going to be a lot of fun to learn from these guys and work together.’’

In two seasons with the Gibbs team, Suarez has amassed 21 top-10 and four top-five finishes. He was moved into the No. 19 car – which will be driven by 2017 Monster Energy Series champion Martin Truex Jr. in 2019 – when Gibbs driver Carl Edwards stepped away suddenly prior to the start of the 2017 season.

Suarez scored a career-best Monster Energy Series finish this past season, finishing runner-up at Pocono after winning the Busch Pole position. He won in both the NASCAR Gander Outdoors Truck Series (2016) and the Xfinity Series (three times in 2016) before moving up to the Cup level with Gibbs in 2017. The former Mexican national go-kart champion won three races in NASCAR’s K&N East Series (2013-14) before earning his shot in NASCAR’s big leagues.

“There are definite new challenges coming into the organization, a lot of new things, pretty much everything and I’m very excited to get up for the challenge,’’ Suarez said. “To work hard and continue the success the 41 car has had in the past. It’s been not too long since I was just a guy racing in the K&N series, so I’m very proud and grateful for these opportunities.”

“In each series Daniel has raced in, he’s advanced quickly from rookie to race winner. … and he did it all while learning a new language and a new culture,’’ Stewart said. “He’s dedicated, he’s talented and we’re proud to have him as a key part of our race team.’’

Suarez will get his first laps in the SHR No. 41 Ford in preparation for the Feb. 17 season opening-Daytona 500 later this week in a Goodyear tire test at Auto Club Speedway.