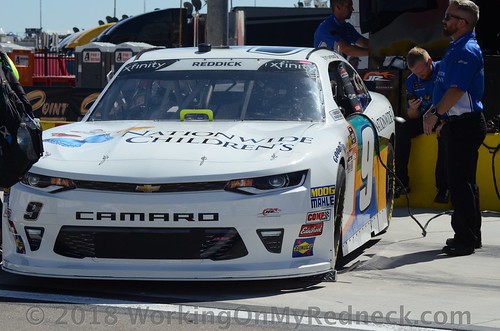 California native Zane Smith has been tabbed to drive eight NASCAR Xfinity Series races for JR Motorsports in 2019, the team announced today. Smith, a member of the NASCAR Next Program, will take the wheel of the organization’s No. 9 entry in his series debut at Las Vegas Motor Speedway (March 2) in partnership with The Cosmopolitan of Las Vegas for the event.

The 19-year-old Smith is the first driver to be named to the lineup of JRM’s No. 9 team, which is coming off its second consecutive NXS championship (2017-18). The team intends to run a full-time schedule next season with a number of drivers at the helm.

“Zane is going to be an important part of the lineup for the No. 9 team next year,” said Dale Earnhardt Jr., owner of JRM. “It’s a great opportunity for him. The team is going to take on a different feel with a handful of drivers taking turns throughout the year, but the goal remains the same – to help these drivers gain experience and continue to advance their careers. We started the Xfinity program with that mindset and it’s something we’re proud to continue.”

In addition to the Las Vegas event, Smith’s schedule is as follows: Bristol Motor Speedway (April 6), Richmond Raceway (April 12 and Sept. 20), Dover International Speedway (May 4 and Oct. 5) and Iowa Speedway (June 16 and July 27).

“JR Motorsports has a strong history of helping groom young talent and we’re looking forward to giving Zane that platform for success,” said Kelley Earnhardt Miller, general manager of JRM. “We feel Zane has much to offer both on and off the track. We’re going to have him in the car for these eight races, but also have him gain additional experience by traveling with the team for the season.”

Smith transitions to JRM from the ARCA Racing Series, where he posted a 2018 season that included four victories and a runner-up position in the season’s point standings. In 36 career ARCA starts, Smith has tallied 19 top-five and 25 top-10 finishes, along with three pole awards. The young racer also made one NASCAR Truck Series start this past year, earning a fifth-place finish.

“I’m super pumped to be a part of JR Motorsports with the No. 9 team for eight races,” Smith said. “I’m counting down the days until Las Vegas, which will be my debut in the Xfinity series. I can’t thank The Cosmopolitan of Las Vegas enough for making this happen, along with all of my other partners who have gotten me this far. Having Dale and Kelley as bosses and to lean on is going to be awesome. They are huge icons of the sport. It is unreal to be a part of their team, so I’m just going to try and take it all in.”

Additional drivers of the team’s No. 9 Chevrolet, along with the crew chief and partner lineup will be named at a later date.  Earlier this year, JRM announced its full-time roster which includes Noah Gragson in the No. 1, Michael Annett in the No. 5 and Justin Allgaier in the No. 7 entry.

ABOUT JR MOTORSPORTS:
JR Motorsports is the management company and racing operation for Dale Earnhardt Jr., NASCAR’s 15-time Most Popular Driver and winner of more than 50 NASCAR-sanctioned races.  Now in its 17th year of overall competition, JR Motorsports races in multiple divisions, including the NASCAR Xfinity Series where it won championships in 2014, 2017 and 2018.  The company also competes in Late Model competition and owns four championships in regional late model divisions.  To learn more about the organization, its drivers and its sponsorship opportunities, visit www.jrmracing.com.

ABOUT THE COSMOPOLITAN OF LAS VEGAS:

The Cosmopolitan of Las Vegas is a unique luxury resort and casino that offers a decidedly different perspective through its commitment to integrating art and high design into every experience. Located in the heart of the Las Vegas Strip, The Cosmopolitan’s distinct vertical multi-tower design features more than 3,000 guestrooms with residential living spaces, private terraces and breathtaking views of the city skyline. Luxury amenities include a premier lineup of world-class culinary experiences; an intriguing mix of bars, nightclubs and entertainment venues; 100,000-square-foot-casino; award-winning spa, salon and fitness center; unrivaled pool district and an eclectic line-up of hand-selected boutiques. For more information visit: www.cosmopolitanlasvegas.com