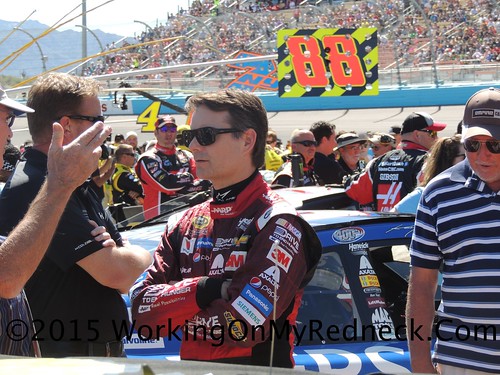 Combined, their organizations have won 1,338 races and 45 championships in NASCAR’s top three series.

But each of these owners are past what many accept as retirement age: Hendrick is 69, Childress is 73, Roush is 76, Gibbs is 78, Penske and Petty are each 81.

“I’ve gotta be out here at least one year longer than (fellow owner/automotive magnate) Roger Penske,” Hendrick said, grinning at the thought before adding, “No … just kidding.” He quickly got serious: “Really, I love this and still enjoy it so much, and it’s tied to my automotive businesses. My health is good, so I expect to be around for a long time.”

Until his death in a 2004 plane crash, Ricky Hendrick was poised to take over at HMS.

“We have a succession plan in place,” he said. “I’d rather not go through it, but we have people who can take over if I’m not here. We had a plan when we lost Dale (Earnhardt) in 2001 and that helped us keep going. That taught me that anybody with a business or an organization has to have a succession plan. Ours includes family and people I trust and can count on.

Editor’s Note:  Most likely Childress’ son-in-law, Mike Dillon (Austins and Ty’s father) would be the person that is targeted to assume control of RCR at sometime in the future.

As expected, nothing at Team Penske is left to chance. While 81-year-old Roger rules the realm, Tim Cindric and Mike Nelson do most of the heavy lifting on the racing side. But most indicators are that Greg Penske, the Captain’s 55-year-old son, will take the helm when his father retires.

As you can see the “Titans” of NASCAR are aging gracefully and their time on Earth is starting to look a heck of lot shorter than it did 30 years ago!  There will come a time, in the not too distant future, when these iconic men will no longer be able to control their racing dynasty.  It is interesting to see that most of these race car owners have put into place some sort of succession within their companies.