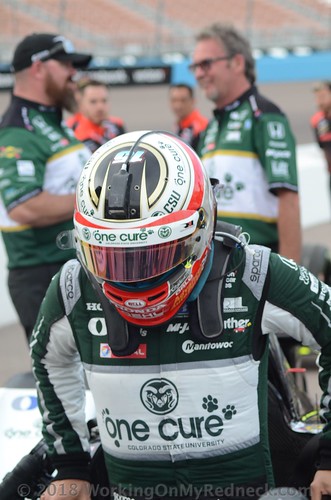 Rahal Letterman Lanigan Racing (RLL) announced a new technical partnership for their IndyCar Series program that the team believes will help strengthen their bid to earn future race wins and championships.  Graham Rahal and Takuma Sato will compete in the full 2019 IndyCar Series season and will be joined at the Indianapolis 500 by Jordan King.

“3D printing is the norm these days in terms of creating prototype Indy car components out of carbon and other materials so our relationship with XYZ Printing will allow us to produce parts for the car much more efficiently for the areas of the car where we have the freedom to produce our own designs,” said Bobby Rahal, team co-owner of Rahal Letterman Lanigan Racing with David Letterman and Michael Lanigan. “Clearly our relationship with XYZ Printing will make a difference for us.”

“The partnership with Rahal Letterman Lanigan Racing is an exciting global opportunity for us,” said John Calhoun, Director of Sales for the America’s, XYZ Printing. “We are thrilled that XYZ Printing’s highly capable and engineering centric professional printers have been selected by a world class team like RLL. Our professional printers allow engineering teams of all sizes unprecedented access to the latest in additive manufacturing technology.”

The 2019 IndyCar Series season begins in March with the Firestone Grand Prix of St. Petersburg on March 10. For more information on the team, please visit www.rahal.com.

XYZ Printing is a leading global provider of comprehensive 3D printing solutions. XYZ Printing is the number one global brand in desktop 3D printing products and services and is now moving decisively into the industrial additive manufacturing arena. XYZ Printing is backed by the world’s leading electronic manufacturing conglomerate, New Kinpo Group, which earns more than $36 billion dollars of revenue annually and has more than 8,500 engineers in research and development across four continents. With nearly two decades of design and manufacturing experience. New Kinpo Group is a recognized manufacturer of many of today’s printers for both personal and commercial use.

Rahal Letterman Lanigan Racing, based in Hilliard, Ohio and Brownsburg, Ind., is co-owned by three-time IndyCar Champion and 1986 Indianapolis 500 winner Bobby Rahal, former CBS Late Show host David Letterman and Mi-Jack co-owner Mike Lanigan.  In 2019, the team will compete in their 28th year of open wheel competition and attempt to add to their 26 wins – including the 2004 Indy 500 from pole with Buddy Rice — their 30 poles, 97 podium finishes and 1992 series championship.  The team also competed in the American Le Mans Series from 2009-2013 as BMW Team RLL where they won both the Manufacturer and Team Championships in the GT category in 2010 and swept all three GT titles in 2011 – Manufacturer, Team and Driver. In 2012, the team finished second in the Team Championship and third in the Manufacturer Championship and in 2013, the team finished second in the Driver, Team and Manufacturer Championship. Since 2014, BMW Team RLL has competed in the GTLM class of the IMSA WeatherTech SportsCar Championship with a two-car program and has brought their total to 19 wins, 26 poles and 73 podium finishes as well as a second place finish in the Manufacturer, Team and Driver championships in 2015 and 2017. The team will enter two cars in the Jaguar I-PACE eTROPHY Series during the 2018/2019 season.  It is the world’s first production-based electric vehicle race series and is a support event to the FIA Formula E Championship.