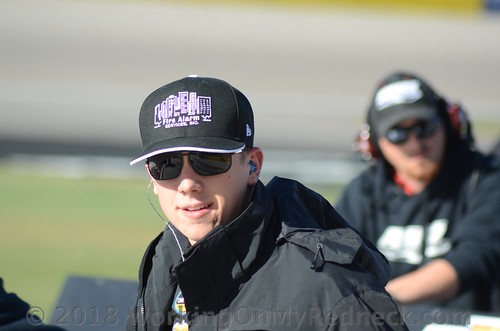 GMS Racing announced today that John Hunter Nemechek will join the team for the 2019 NASCAR Xfinity Series (NXS) season. Nemechek will be the driver of the No. 23 Chevrolet Camaro under the GMS Racing banner and will contend for the 2019 Sunoco Rookie of the Year honors.

“I am very grateful for the opportunity that Mr. Gallagher and the entire GMS Racing organization has presented to me to be able to run full-time in 2019,” Nemechek said. “The results that GMS Racing showed last year in their NASCAR Xfinity Series program were impressive. Their goal is to create a championship-caliber team, like their truck series program, and I believe that we can achieve that goal in the 2019 season.”

Nemechek capitalized on his six NASCAR Gander Outdoors Truck Series (NGOTS) seasons, where he collected six victories, 28 top-five finishes, and 48 top-10 finishes. He captured his first pole award in 2016, and added to his collection in with a second pole award in 2018. In addition to his successful NGOTS campaign, Nemechek was named to the 2015-2016 NASCAR Next class, and was awarded the 2015 Most Popular Driver for the NGOTS.

The 21-year old will be under the guidance of NASCAR Xfinity Series veteran crew chief Chad Norris, who joined GMS Racing at the beginning of the 2018 season. Norris led the No. 23 Chevrolet Camaro team to a record year after collecting the Statesville, N.C.,-based organization’s first NASCAR Xfinity Series win at the Talladega (Ala.) Superspeedway with Spencer Gallagher, as well as producing six top-five and 17 top-10 finishes.

“John Hunter (Nemechek) is a wheelman,” Mike Beam, president of GMS Racing, said. “We are excited to have him on board for the 2019 season. With how much progress we showed last year in our NASCAR Xfinity Series program, I know that John Hunter will take us to the next level.”

GMS Racing competes full-time in the NASCAR Gander Outdoors Truck Series with drivers Johnny Sauter and Sheldon Creed, and in the NASCAR Xfinity Series with John Hunter Nemechek. The team also expanded their competition to the NASCAR K&N Pro Series, as well as in the ARCA Racing Series with Sam Mayer. Since the team began in 2014, GMS Racing won the 2016 NGOTS Championship and has grown to occupy several buildings located in Statesville, N.C. The campus also includes operations for GMS Fabrication. More information can be found at https://gmsracing.net/.