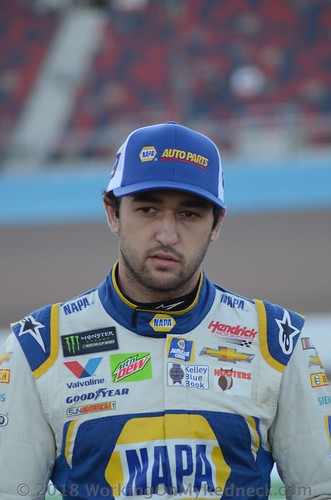 William Clyde Elliott, Jr., aka Chase, has followed either in his father’s footsteps or the path of Dale Earnhardt Jr., depending on how fans view it, as he won the voting for the 2018 NASCAR Cup Series Most Popular Driver award.

Earnhardt had won the award for 15 consecutive years through his retirement following the 2017 season. His 15 overall MPD awards is one short of the record of 16 earned by Elliott’s father, “Awesome Bill From Dawsonville“.

Chase Elliott said he felt he was following more in his father’s footsteps than Earnhardt’s in accepting the award Thursday night at the Wynn Las Vegas. Elliott drove in the Xfinity Series for Earnhardt and was a teammate of Earnhardt’s at Hendrick Motorsports in 2016 and 2017.

“I would say Dad’s history probably means more to me with it than Dale’s does,” Elliott said. “But [with] Dale becoming a good friend over the past few years, it’s a very cool honor.”

The 23-year-old Elliott had pretty much been anointed by Earnhardt as the likely heir to the throne for this award, the result of fan voting administered by the National Motorsports Press Association.

“When all your peers answer the interviews [during the year] as if you’ve already won, it kind of makes it odd,” Elliott said. “But when you go to the track and you see people and you see how fired up they are and when you have success or have a bad day, that support system that you have there from people means a lot to me.

“I am sure there are a lot of people that don’t like me, too, which is fine. And I probably don’t like them either, so it’s all good — nah, it’s awesome. I’ll enjoy it. This is a great honor to have.”

Elliott is quiet and not boisterous by nature and has accumulated fans by being himself and carrying on the family name. He won three races in 2018 and finished sixth in the standings.

“The biggest thing that I noticed that was really recognizable was just how fired up people were about wanting my team to do good this year and seeing all the hats and T-shirts and things,” Elliott said.

“Those are the things that really hit home with me, seeing it at track, live and in person.”

Earnhardt presented the award to Elliott on Thursday night.

“It’s so cool that it stayed between Elliott and Earnhardt for so long. I am glad though that you quit a year before you broke dad’s record,” Elliott said when standing on stage with Earnhardt. “That’s pretty cool. So I’m pretty happy about that.

“We got it back in the right name. I’m a little biased. Sorry.”