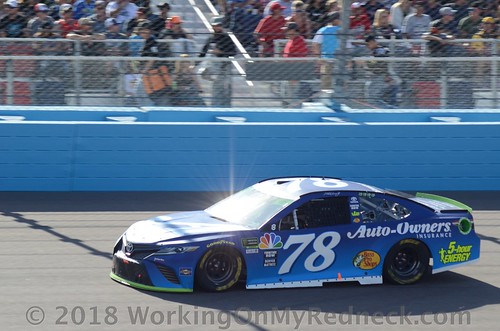 Though Truex and the No. 78 Furniture Row Racing team did not capture the championship, both driver and team fought to the end with that same “Never Give Up” attitude that had made them one of the elite teams in NASCAR’s top series.

As expected, the emotions in the season finale were off the charts for the Denver-based Furniture Row Racing team, which announced in early September it would cease operations after the completion of the 2018 season due to the lack of sponsorship funding to remain competitive.

Truex, who qualified third, ran in the top-five for almost the entire race. He took the lead on the final restart with 14 laps remaining. But his No. 78 Bass Pro Shops/5-hour ENERGY Toyota, which was the strongest on long runs could not hold off Logano’s short run speed in the closing laps.

“I knew that last restart was going to be tough,” Truex said. “We were able to get the lead, I just couldn’t do anything. We turned and I’d try to go as fast as those guys and I’d be dead sideways and I just couldn’t do it. I don’t know what else I could’ve done. He (Logano) passed me so fast I didn’t even get a chance to do anything. We needed more laps. We just needed more time. Proud of my guys and proud of everybody.”

Prior to the last caution (Lap 248 of 267), Truex was the frontrunner with the fastest car on the track.

When he exited his Furniture Row Racing No. 78 entry for the final time to do post-race interviews, Truex was understandably emotional.

“I am going to miss these (Furniture Row Racing) guys – they made me a superstar in NASCAR and it was the best time of my life. I am thankful for them all,” said Truex as his voice was cracking. “Wish we could have won. We had it. I just needed time, that’s all I needed. They were faster than us for 15 or 20 laps all day. It was like a reverse scenario from last year.

“Honestly, we worked our guts out all weekend. I told you earlier we shut a lot of people up and made them eat crow and that felt good. To come here and almost upset the field and almost win it back to back was really awesome. So many people to thank – Barney (Visser, team owner), Joe (Garone, team president), Johnny (Morris, Bass Pro Shops), 5-hour ENERGY, Auto-Owners Insurance, Furniture Row, Denver Mattress, Cole (Pearn, crew chief). And of course, all the guys here at the track and at the shop in Denver for their extraordinary hard work during these trying times. I am going to miss them all.”

No doubt, Furniture Row Racing’s rise from obscurity to a championship caliber team, was an incredible journey that only one person in the auto racing world thought could happen. That individual was team owner and Denver native Barney Visser. It is a story that will be told for many years to come.