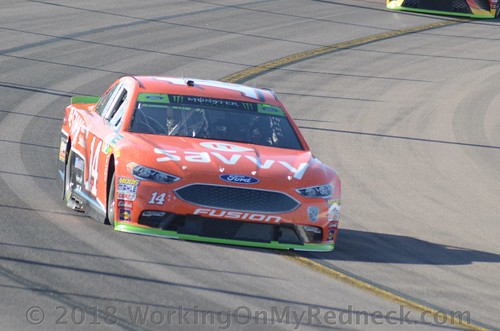 ● Told his crew on the opening lap, “You’ve worked your asses off this year, had a lot of fun and a lot of success.”

● Pitted from 15th on lap 36 for minor adjustments to help his car’s handling.

● Stage 1 ran caution-free, never giving Bowyer a chance to climb into the top-10.

● Asked for air adjustment to help his car turn in the center of the corners.

● Turned in top-five lap times and climbed as high as eighth.

● Race restarted with 16 laps left in the stage, but Bowyer was blocked in traffic and fell back to 13th.

● Bowyer climbed back to 10th before the stage ended.

● Moved to eighth in the opening laps of the stage and seventh 10 laps later.

● Restarted the race in fifth with 68 laps remaining but fell to eighth with 40 to go.

● Pitted with 39 to go but told his crew in the closing laps that he couldn’t turn in the middle of the corners.

● Caution fell with 20 to go, and Bowyer pitted, returning to the track in 13th.

● Bowyer raced his way up to seventh in the final laps before Chase Elliott edged him at the finish line.

“I want to congratulate everyone at Ford Performance. I wish it were Kevin (Harvick) winning the championship, but I’m glad we kept it in the Ford family. That was a decent way to end the season tonight for us. We didn’t qualify like we wanted Friday, but we had a good car tonight. We’ve had a good year. My guys have worked hard and had a lot of fun and a lot of success. We’re ready for a break, but it won’t be long, and we’ll be ready to go to Daytona and start the new season.”

The 2019 season kicks off with the traditional Speedweeks at Daytona (Fla.) International Speedway. The 61st Daytona 500, the first points-paying race of the year, is Feb. 17 and will be broadcast live on FOX.