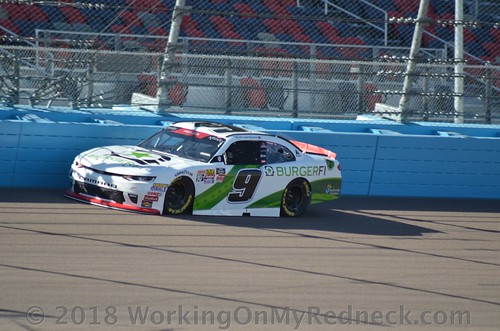 Tyler Reddick was the only driver of the Championship 4 who really liked it on top, and his willingness to run the wall paid off with a race win and a NASCAR Xfinity Series title.

Charging forward in the top lane, even though it meant an occasional brush with the outside wall, Reddick pulled away from pole winner Cole Custer during a long green-flag run to the finish to win Saturday’s Ford EcoBoost 300 by 6.902 seconds.

“I picked a really good time to get my life together and decide to win a race,” and elated Reddick said in Victory Lane.

In fact, Saturday’s win was the third in Reddick’s career and his second of the season. Reddick won the 2018 opener at Daytona International Speedway by .0004 seconds over JR Motorsports teammate Elliott Sadler, who finished 14th on Saturday in his final start as a full-time driver.

At Daytona, Reddick’s margin of victory translated to roughly three inches. At Homestead, it was a no-doubter. Once he passed fellow Championship 4 competitor Christopher Bell for the lead on Lap 164 of 200 and stayed within inches with the wall lap after lap, he quickly pulled away for the win, the championship and the Sunoco Rookie of the Year honors.

“I just knew we had to execute,” Reddick said. “I thought we had a chance if we just made it to Homestead. I like this track—it rewards my aggression. Tonight, we hit the wall a lot, but the car kept in one piece, enough for me to get to the end.”

Pit strategy also played out in Reddick’s favor. Bell came to pit road under green on Lap 141, and Reddick followed a lap later. Custer didn’t bring his No. 00 Ford to pit road from the lead until Lap 147, after losing roughly two seconds per lap, and exited 8.006 seconds behind Reddick.

Bell passed Reddick for the lead on Lap 154 but within 10 laps the seven-time winner had used up his short-run speed and surrendered the top spot back to Reddick.

Custer took second from Bell on Lap 165 and closed to within 2.7 seconds with 30 laps left, but Custer couldn’t find the speed at the top of the track and quickly lost ground.

“I think if we could have run the top better, we could have won,” said Custer, who led the first 93 laps before losing two positions on pit road during stops under caution after the second stage. “We got so far behind (after the exchange of pit stops), and once I caught him, our tires got equaled out, and then he started running the top, and I just couldn’t keep up with him.

“Congrats to Tyler. I’m happy for him, but it’s frustrating.”

Trying to run the top lane, Bell smacked the wall on Lap 181 and had to pit with a flat right-rear tire on Lap 190. He finished 11th, one lap down. Championship 4 driver Daniel Hemric ran a distant fourth behind Reddick, Custer and John Hunter Nemechek. Hemric was 17.836 seconds behind Reddick at the finish.

Reddick is the third JR Motorsports driver in five years to win the Xfinity championship as a rookie, following Chase Elliott (2014) and William Byron (2017), both of whom now drive for Hendrick Motorsports in the Monster Energy NASCAR Cup Series. All three rookie champions have driven the No. 9 Chevrolet for JRM.

“(Crew chief) Dave (Elenz) had a great strategy tonight that cycled Tyler into the lead,” said team co-owner Dale Earnhardt Jr. “And Tyler had the speed and the nerve to run the laps he needed to keep the lead.

“I’m telling you, to run on that fence like he did at the end of that race, that takes some precision. He did such an amazing job doing that, and he earned the victory tonight and the championship.”

Check out the results of the Ford EcoBoost 300 at Homestead-Miami Speedway.