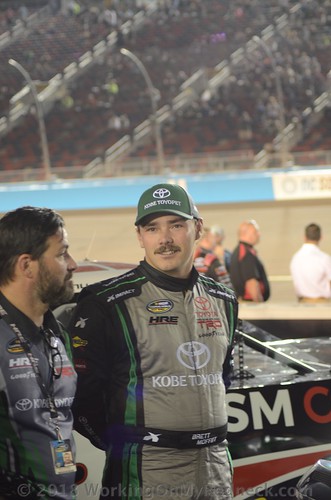 Brett Moffitt captured the NASCAR Camping World Truck Series’ biggest prize on Friday night, the culmination of a storybook season for the Iowa native and his single-truck race team.

Moffitt, 26, completed an outstanding campaign for Hattori Racing Enterprises, winning the race and the championship following the Ford EcoBoost 200 at Homestead-Miami Speedway. The feat seemed unfathomable just a few months ago when there was a concern the operation wouldn’t be able to survive an entire season.

But on Friday night, they were champions!

Scoring a career-high six wins, Moffitt earned a spot in the Championship 4 following his first full-time truck series season. He punched his ticket to the Playoffs early, winning the second race of the season at Atlanta. From there he continued his winning ways with regular-season victories at Iowa, Chicagoland, and Michigan. Moffitt’s momentum continued in the Playoffs, where he captured a win at ISM Raceway securing the team’s Championship 4 spot.

Moffitt finished this season with six wins, and career highs in both top fives (13) and top 10s (13).

Chevrolet won its ninth Manufacturer Championship, and first since 2012, after a strong season that included 11 victories.

TIL NEXT TIME, I AM STILL WORKING ON MY RECDNECK!