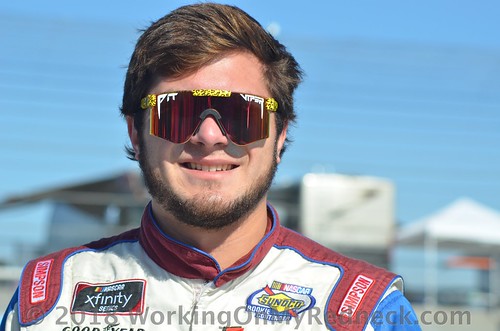 Last week at Phoenix I caught up with a young driver, Vinnie Miller.  I have spoken with Miller on several occasions over the last 18 months as he has climbed the ladder from super late models to ARCA to now the Xfinity Series.  He is a refreshing young man that is hoping to work himself up to a Sunday ride in the MENCS one day soon.  I hope that you will find this conversation entertaining and worthy of your time.

WorkingOnMyRedneck:  Vinnie we are now coming to the close of the 2018 NXS season, you have been to all of the race tracks on the schedule, save Homestead-Miami Speedway,  what has bee your biggest thrill of the Xfinity season?

Vinnie Miller:  Let’s see, when was the last time we talked, about May?  Well, I would say that I have two.  The first thrill was when we had that huge rain delay up at the Indianapolis Motor Speedway.  I had never been on the track before and everybody.  There was no practice and no qualifying was telling me that I could hold it wide open, there was no practice and no qualifying.  I go out, start the race dead last at Indy, I finished 19th with a restrictor package that made it very difficult to pass there.  As I found out Indy is a one-groove track.  But to do this without practice or qualifying was really a cool thing.  That 19th place finish at Indy was my best finish so far this season!

The second biggest thrill would have to be partnering with B.J. McLeod for the remaining 2018 season.  We started together at the Charlotte “Roval”.  The deal came together really quick, in about two months.  We have put together a two-year deal and it has been a great partnership so far.  I think that over the next two years we are going to have a really strong team to build upon.  I am super excited to have some job security during this time period!

Vinnie Miller:  BJ and I get along really well.  I was friends with him before he was my team owner.  So we had a relationship already built prior to me going to work for him.  BJ also drives in the Xfinity series almost every week and he understands what is going on in the race car.  So he can offer his help and expertise as a driver to help me out if I am doing something wrong or help me do things better.  That is just one of the reasons that it has been so smooth since I made this transition from JD Motorsports to BJ McLeod Motorsports.

VM:  While driving for Johnny Davis we had some difficulties with mechanical issues and I had been talking with BJ about working with his organization next year.  Johnny caught wind of this somehow and asked if I would like to go over to BJ’s team early?  He said that if I went over to BJMM at this point in the season I would have a couple of races under my belt with that organization, be familiar with BJMM personnel, and would already be working together well.    So by doing this, it takes away all that newness at the beginning of the year and the relationships with BJMM will already be built.  In the first race that I ran for BJ we all just clicked and I felt right at home!  So going into next year I think that we will have an advantage over some other rookies that are coming into the Series.

VM:  I wouldn’t say that it is a higher budget deal.  We are not scrambling to get anything together.  But obviously, we will be still looking for sponsors over the next couple of years, and they are hard to find.  If we can secure additional sponsorship, there is an option for the third year with BJMM.  We have the funding to do the two-year deal, but some of it is out of pocket.  If we can find and secure sponsorship funding to help out it would be a great deal.

WOMR:  I have interviewed BJ several times and he appears to be a good guy.  What is it like working for him?

VM:  I like BJ and he is down to earth, no nonsense, good guy.   He doesn’t BS you and that is what I really like about him!

WOMR:  I have asked you about your greatest thrill of 2018, what was your biggest disappointment this year?

VM:  My biggest disappointment this season was having four mechanical failures right in a row!  Four of those failures in a row kind of knocks your confidence down.  I had one more race with Johnny Davis that we finished and then we moved over here to BJMM and I have been rebuilding my confidence every since!

WOMR:  Since moving up into the Xfinity Series was a gigantic leap from super late models and some ARCA racing, what has been your biggest lesson that you have learned?

VM:  I think that the biggest lesson that I have learned is that you have to take care of your equipment.  For the lower budgeted teams it is very important not to add to the work week of the team by making them repair all the damage done in the previous race!  If you bring back a clean car to the shop, it gives the team an extra three days to work in the car to get it ready for the next race.  By giving the team extra time to work in the race car you will have less mechanical failures.

WOMR:  At this point of the season and your career you have hit all the race tracks, save Homestead, and a few of them twice.  What is your favorite race track?

VM:  I like Dover.  It is a one-mile concrete track with a lot of grip.  We go almost as fast there as we do on a lot of the mile-and-a-half race tracks.  I have been there twice and each time I have been there I have had solid finishes.  Everyone told me that Dover would be one of the hardest race tracks to learn, but I rolled off of the trailer and learned it right away.

WOMR:  Just a side question.  You go so darn fast at Dover, and it appears to be a high-speed mixing bowl, do you ever lose track of where you are on the race track?

VM:  No not at Dover.  No that would happen at Bristol!  The only thing that helps me keep oriented at Bristol is the gate at turn #3!  One of the key things at Dover is that there are two walkover bridges on the backstretch to help keep oriented.

WOMR:  So Vinnie,  if road courses give you trouble, what are you going to do to make you a better road racer next year?

VM:  I think that it is just going to take time for me.  It is kind of like when an old man smokes cigars and drinks Scotch, he just figures out what brand of both works for him over time.  That is just how I am going to overcome that road race handicap, it will just work itself out over time.

As I mentioned earlier. I have trouble with Phoenix because it is like a road course in that the turns 1 & 2 are different from turns 3 & 4, just like every turn at a road course is different.  So here at Phoenix, you feel like you are going slow until you reach the turns and then it is “oh crap I am really going fast” I gotta do something.  Also, the turns are so very different at this track and how you attack them.  I just compare this track, Phoenix, to a road course because you have to get up off of the corners and accelerate to have quick times.  I am still trying to figure out where I can do that and go fast.    I think that I have the new turns 1 & 2 figured out here, but I still haven’t got the other end of the track figured out yet just exactly where I can get back to the gas.

WOMR:  Speaking about reference points for braking and getting back hard on the loud pedal, what are you looking for in the way of reference points to help you be consistent?  Do you look for some point on the track, or the retaining wall, or is it just a seat of the pants feel?

VM:  For me, at about 75% of the race tracks it is just a feeling.  The other 25% of the tracks have three sets of cones- a group of three- a  group of two cones- then just one cone on the wall- that signifies distances from the turn.  Since we don’t want to bring out a backup car each week, and not racing on a huge budget, my thing is that I will begin in practice taking it easy, especially if I have never been there before.  Then I  gradually work into driving it deeper into the turns during each practice session.  Once I get into it, if the tracks have cones, I will start looking for them as a guide for when to get off the accelerator and onto the brakes.

As I wrapped up our interview I couldn’t help thinking about how this young man is maturing as a person and a race car driver.  I have talked with Vinnie three or four times over the last 18 months and he has grown by leaps and bounds at each interview.  Granted he is only 21 years old and is just completing his first year in the Xfinity Series, but Miller is determined to hone his skills and to become the best race car driver that he can be.  (Additionally, he has a great sense of humor and we laughed quite a bit during this interview.) I think that his moving over to work for B.J. McLeod at BJMM, may be an excellent opportunity to craft his skills under the tutelage of a more experienced driver and owner.

It will be interesting to see how the combination of Vinnie Miller and B.J. McLeod work together in 2019.  It should be a very good deal for both the race car driver, Miller, and the car owner, McLeod.   Both are trying to build trying to build their individual brands in NASCAR.

When the 2019 race season begins in just a few months I will be getting together with both Miller and McLeod, at Las Vegas and Phoenix, to do something very different, something that I have never done before, a joint interview discussing their individual and collective 2019 expectations.  Stay tuned for that interview, it should be very informative and entertaining!

TIL NEXT TIME, I AN STILL WORKING ON MY REDNECK!