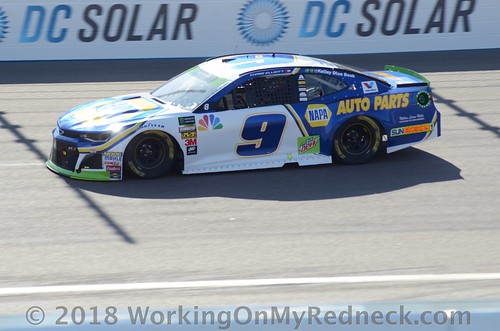 Chase Elliott blamed himself—not for the wreck that cost him a chance to run for the Monster Energy NASCAR Cup Series title.

No, Elliott took responsibility for the Lap 230 speeding penalty that mired him in traffic and put his No. 9 Chevrolet in harm’s way. When Denny Hamlin ran Kurt Busch into the outside wall after a restart on Lap 269, Elliott caught Busch’s No. 41 Ford on the rebound and sustained enough damage to lose three laps and a title shot.

“Yeah, don’t speed before that and you don’t get caught back there in the back,” said Elliott, who earlier had won the first stage of the race. “It was completely my fault, and when you make mistakes like that, you get put behind, and that’s when you get wrecked.

“So, I had a pretty good NAPA Chevy, especially on the long runs. We could run with those guys. I couldn’t get going quite as good as I wanted to. But if you stay away from that penalty, you never know. I hate it, but we’ll try to get a win next week.”

Sunday’s Can-Am 500 at ISM Raceway was part of learning experience for the driver of the No. 9 Hendrick Motorsports Chevrolet, who had a breakout year with three race victories this season. But Elliott couldn’t match the Playoff point totals of Kevin Harvick, Kyle Busch, and Martin Truex Jr., all of whom had margins for error entering each round of the Playoffs.

“You just have to make the most of opportunities,” Elliott said. “The whole year counts. Those guys, winning a lot of races throughout the season, is what kept them away from a pressure-filled situation. All the bonus points they built up pretty much got them to Homestead, and that’s the way that stepping stone is meant to work. It pays to win. So we’ll try to win more next year.”