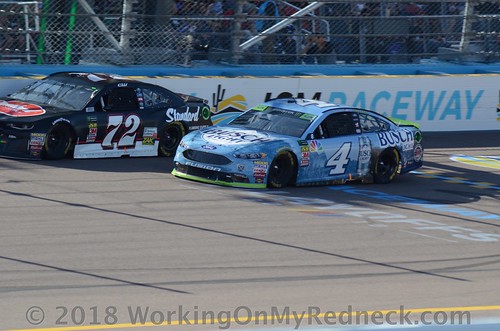 Point Standing: Tied for 1st with 5,000 points, advanced to Championship 4

● The Busch Light Ford led the first 72 laps before a punctured tire sent the car to pit road with two laps remaining in the stage.

● The team fell a lap down during the stop and restarted as the last car one lap down.

● Harvick came to pit road for four tires and fuel following the stage. The team was ineligible for the wave-around due to a commitment line violation.

● The Busch Light team was awarded the free pass to return to the lead lap on lap 96.

● The team stayed out under caution as many of the leaders came to pit road. The strategy allowed Harvick to restart third on lap 139.

● The No. 4 Ford held on to the fourth position to end the stage.

● The team came to pit road for four tires and fuel at the conclusion of the stage.

● The No. 4 Ford raced from 10th up to the fourth position before coming to pit road for four tires and fuel on lap 227.

● The caution flag came out while the No. 4 Busch Light Ford was on pit road, trapping the team a lap down.

● Harvick took the wave-around on lap 235 to return to the lead lap in the 11th position.

● The Busch Light team came to pit road under caution for a two-tire stop on lap 265 and came out sixth.

● Harvick narrowly avoided a multicar incident on a lap-268 restart that took out Kurt Busch and Chase Elliott.

● The No. 4 Ford was in the third position on lap 286 when the caution flag came out. He restarted second on lap 292.

● The Busch Light team chose to stay out for the final caution on lap 295 while in third.

● The team restarted third on lap 300 and held on to score a top-five finish.

Were you stressed at all in the car or did it just fuel the fire for you?

“Yeah, we’re happy about going to Miami and I think as you run you just want to make it lap by lap.”

Any indication the right-front tire was going down when it did?

“Yeah, I felt it start to go down going into turn one there and just slowed down to the point where I thought I could at least make it back to the pits and not hit the wall.  It came at an OK time because it didn’t tear the car up.  It never really drove as well after that, but we kept ourselves in position all day and there at the end it was just like with everybody wrecking and all over the place, we just needed to stay out of trouble and try to find a safe spot there.”

●  Harvick led twice for 73 laps to increase his laps-led total at Phoenix to a series-best 1,595. This is nearly twice as many as the next best driver Kyle Busch, who has led 944 laps at Phoenix.