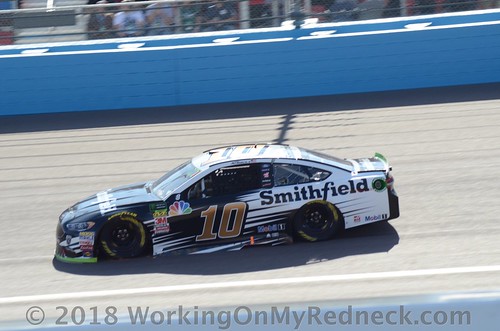 Aric Almirola was close enough to taste the victory that would have assured him of a Championship 4 berth and knocked Stewart-Haas Racing teammate Kevin Harvick out of the final four.

With 12 laps left in Sunday’s Can-Am 500 at ISM Raceway, Almirola’s No. 10 Stewart-Haas Racing Ford lined up beside race leader Kyle Busch for a restart with 12 laps left. But Busch got the jump on the restart, and Almirola faded to fourth behind runner-up Brad Keselowski and third-place Kyle Larson.

“I thought we were a seventh-to sixth-place car, and that’s what I thought we were yesterday (in practice), too,” Almirola said on pit road, after getting a consoling hug from team owner Tony Stewart. (Crew chief) Johnny (Klausmeier) and all these guys fought their guts out, and I fought my guts out inside the race car and gave it everything we had. We took a seventh or eighth-place car and the next thing you know we were in position to win the race.

“I’m just really thankful for this group and these guys on the Smithfield team are awesome. This is our first year working together. You look at all the teams we’re racing and they’ve got four, five, six, seven years working together, so what we’ve accomplished in one year is a hell of a lot.

“But right now all I can think about is being inside of Kyle down there in the new (Turns) 1 and 2 and just not being able to get the power down to get up beside him. It’s bittersweet. It was a good day for us, but today we needed to win—and we didn’t win.”