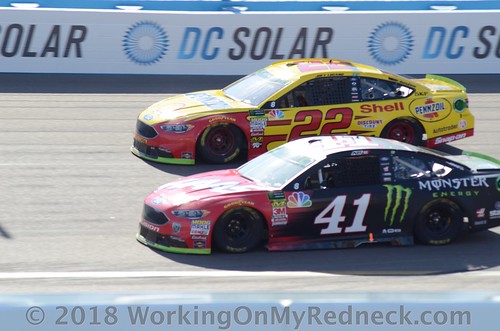 Charging forward from his 14th-place starting position, Busch climbed to fourth by the end of the first 75-lap stage. After a quick pit stop under caution, he was second for a restart on Lap 84 and grabbed the lead from Chase Elliott on the restart lap.

Busch led the next 52 laps before crew chief Billy Scott called him to pit road under caution on Lap 135. As he accelerated off Turn 2 onto pit road, Busch passed the pace car and drew a one-lap penalty, a circuit he didn’t regain until Tanner Berryhill spun to cause the fifth caution on Lap 228.

After working his way forward and staying out on older tires, Busch was second for a restart on Lap 269. That’s when his race and his championship hopes came undone.

Racing in a knot of cars off Turn 2, Busch was forced wide, and Denny Hamlin knocked Busch’s No. 41 Ford into the outside wall. Bouncing off the barrier, Busch collected the No. 9 Chevrolet of Chase Elliott, who title dreams also ended in the wreck.

“Erik Jones was on my inside when we restarted, and I just wanted to make sure I didn’t slip through the new (Turns) 1 and 2,” Busch said after exiting the infield care center. “If I could have been to somebody’s outside off 2, then I thought we had a good shot of maintaining the lead, and I just got cleaned out. I flat out got cleaned out.

“If the rule earlier in the race on the pit road of passing the pace car is black and white, I just need to get brushed up on my rule book. I didn’t gain anything by doing what I did other than just digging from behind all day. It was a really good year for our Haas Automation Ford. Thanks to Monster Energy and everybody that put their talent into that 41 car. I just didn’t get the job done to get us to Homestead.”