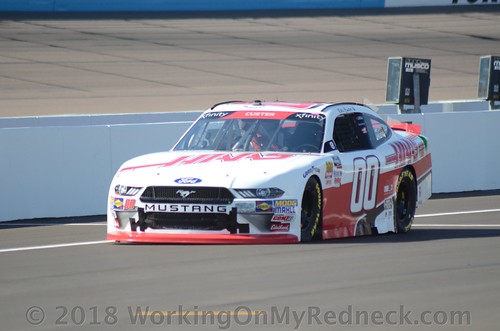 ● Custer said his Haas Automation Ford fired off loose and became tighter as the stage wore on.

● He ran inside the top-five for the entirety of stage.

● Custer pitted the No. 00 Ford for four tires, fuel and chassis adjustments at the end of the stage. He gained one position on pit road.

● Custer battled inside the top-five for the majority of the stage and fell to sixth before the green-checkered flag waved.

● He pitted for four fresh tires, fuel, and wedge and chassis adjustments when Stage 2 ended.

● After a lap-136 caution, Custer pitted for four tires fuel and adjustments and moved to sixth place.

● He returned to the top-five on the restart until a lap-145 caution, but fell to eighth on the following restart due to an issue while shifting gears.

● Custer raced inside the top-10 for the remainder of the race and earned his third top-10 at Phoenix.

● Custer automatically advanced to the Championship 4 at Homestead-Miami when he won last weekend at Texas Motor Speedway in Fort Worth.

● Custer earned his 25th top-10 of the season and third at ISM Raceway.

● This will mark Custer’s first Championship 4 eligibility of his Xfinity Series career.

● Christopher Bell won the Whelen Trusted to Perform 200 to earn his eighth career Xfinity series win, seventh of the season and first at Phoenix. His margin of victory over second-place Daniel Hemric was 1.887 seconds.

“We kind of struggled all day. We tried something different this race and I don’t know if it was what we were looking for, but we’ll go on to Homestead. We just have to do everything to our full potential and we have as good a shot as anybody of winning. We just have to make sure we do everything right. We’ll be in full focus mode starting now. It’s all eyes on the championship.”

The next event on the NASCAR Xfinity Series schedule is the Ford EcoBoost 300 on Saturday, Nov. 17 at Homestead-Miami Speedway.