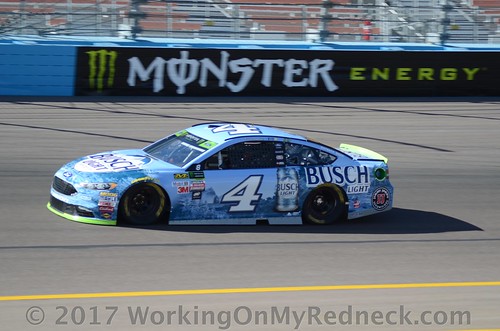 Three of the final four Playoff positions are still up for grabs as the Monster Energy NASCAR Cup Series breaks in the new-look one-mile oval that has historically produced all the excitement you’d expect for such an important championship set-up.

Only Team Penske’s Joey Logano has secured a position in the Championship 4 that will ultimately vie for the 2018 Monster Energy NASCAR Cup championship at Homestead-Miami Speedway on Nov. 18.

A major penalty this week for the No. 4 Stewart-Haas Racing team negated Kevin Harvick’s win at Texas Motor Speedway last weekend in counting toward the championship race eligibility. And a 40-point penalty means the nine-time ISM Raceway winner goes from an automatic championship berth to falling to fourth place in the standings – a mere three points up on fifth place Kurt Busch.

Traditionally, the Phoenix oval has been Harvick’s playground. He has nine Cup victories there, including one just this spring. He is the last driver to sweep a season at Phoenix, doing so in 2014 – the year he won the Cup championship.

The track’s reconfiguration – which debuts this weekend – could be the ultimate wild card, however. In addition to new fan amenities, the track itself has a new look. The start/finish line is now located just beyond what used to be Turn 2, in front of the new main grandstands. The former Turns 1 and 2 are now Turns 3 and 4 – and vice versa.

“I’m telling you I think moving the start-finish line is going to be a bigger deal than anyone thinks,” Stewart-Haas Racing driver Bowyer said. “I’ve raced at a lot of racetracks all over the country and I have never seen a start-finish line right out of the corner. It’s very, very unique and it’s going to be interesting to see how it all plays out.”

“I think where you will see that really play out is on restarts and finishes. How it comes down to that last-lap pass for a position to maybe put yourself in the Playoffs or something – you kind of just have to make it out of that corner. You just have to kind of have forward momentum to make it across the line. That, in my opinion, can bring on some wild, wild things, I think, over the next few years there.”