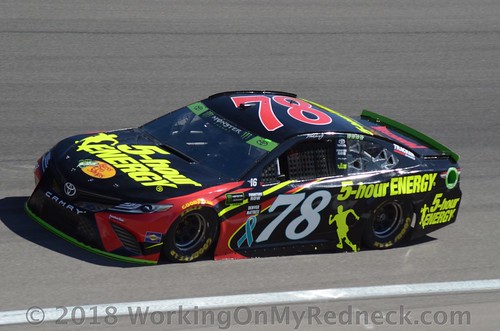 “We get to fight another day,” said Martin Truex, Jr. to his team after taking the checkered flag in ninth place Sunday at Texas Motor Speedway.

Finishing ninth at a 1.5-mile track would not be considered a good day for Truex, who has been one of the NASCAR Cup Series dominant drivers on mile-and-a-half ovals. But considering the emotional roller coaster that Truex and the Furniture Row Racing team went through the ninth-place place overtime finish looked pretty, pretty good.

Truex came into the race 25 points above the cutline to advance to the Championship 4 Round in two weeks at Homestead-Miami Speedway, and he goes into next week’s final race in the Round of 8 at Phoenix with the same 25-point cushion with two of the four transfer spots remaining.

His 25-point lead is over Kurt Busch and he trails Kyle Busch by only three points for the third-place position.

It was no easy task for Truex to maintain that 25-point cutline margin. He had to overcome a number of setbacks in his No. 78 Bass Pro Shops/5-hour ENERGY Toyota.

The first hiccup for Truex was starting the 334-lap race from the rear of the field due to an engine change following Saturday’s final practice. The 38-year-old driver was able to overcome that deficit by finishing fifth in the first stage and third in the second stage.

After scoring the third-place result in the second stage it appeared that Truex would be one of the drivers to contend for the overall win. But then disaster struck the No. 78 team during a Lap 224 pit stop.

Following the four-tire stop, Truex reported a vibration and 19 laps later his right-rear wheel got so loose that he was called back into the pits by crew chief Cole Pearn while the race was running under green-flag conditions.

What made matters worse for the No. 78 team was when Truex came down pit road, he was penalized for driving through pit boxes. The loose tire and penalty put Truex two laps down and in a precarious playoff points position.

But the gritty Truex eventually got one lap back and when a caution came out on Lap 296 he was back on the lead lap as the Free Pass recipient. He restarted 15th.

“Had to start at the back, got to the front, hung around there for a while and then had a loose wheel there again,” Truex explained. “A tough day, but overall, a good day. Luckily we were able to get up front and get some stage points in the first two stages and then we had trouble. But we at least had time to recover. Proud of everybody on this Bass Pro Shops/5-hour ENERGY Toyota.”

When asked about next Sunday’s race in Phoenix Truex said, “I feel okay about where we are and feel like we’re in decent shape going to Phoenix. We’ll go there and race hard again and see what we can do. I think we need a little more speed to run with the Fords – they’re clearly really, really fast right now and if we’re off just a little bit we can’t run with them. On the short run, they (Fords) were really fast, but on the long run I thought we were as good as anybody, but just never got to show it. Track position was so hard to get.”

The race had eight cautions for 37 laps and there were 16 lead changes among seven drivers.

The final race in the Round of 8 is next Sunday, Nov. 11 at ISM Raceway in Phoenix.