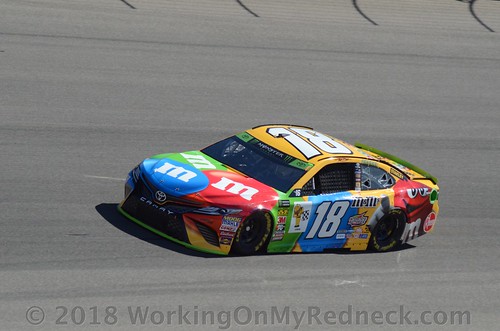 During a pit stop on Lap 32 under a competition caution, he entered the first sector of pit road too fast and was flagged for a penalty. Restarting from the rear of the field, Busch worked his way up to seventh by the end of Stage 1, but the second 85-lap segment brought more problems.

Ten laps after pitting on Lap 131, Busch brought his No. 18 Toyota to pit road again, thanks to a loose wheel. He fell two laps down and didn’t regain the lead lap until the race reached overtime. By then it was too late to climb higher than 17th at the finish.

Nonetheless, Busch goes to the Monster Energy NASCAR Cup Series Round of 8 elimination race with a 28-point lead over his brother, Kurt Busch, who stands fifth — the first driver below the current cut line.

“We had a fast car,” said Adam Stevens, Busch’s crew chief. “You speed on pit road, you go to the back and you have a loose wheel under green then lose a couple laps and we just couldn’t get back on the lead lap.

“Obviously, at the very end we did, but it didn’t matter at that point with only a green-white-checkered to finish. Felt like we had something we could have raced for. We didn’t make many adjustments, but nothing to show for it.”