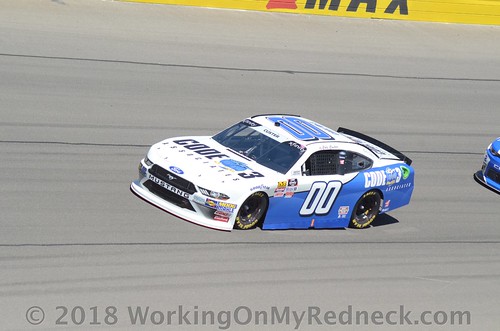 ● The Autodesk Ford driver said the No. 00 Ford Mustang was a bit loose early in the stage.

● The No. 00 Autodesk Ford Mustang pitted on lap 48 for four tires and fuel.

● On lap 80, while attempting to pass Tyler Reddick for the lead, both cars nearly hit the spinning car of Joey Gase. Both cars avoided him and Custer was the leader.

● The No. 00 Autodesk Ford Mustang pitted on lap 93 for four tires, fuel, and a track bar adjustment.

● Custer pitted on lap 127 for four scuffed tires and fuel. He was penalized for a man over the wall too soon and restarted 23rd.

● On lap 135, Custer pitted for fuel only. Restarted in18th position.

● On the last restart with two laps to go, it was Custer and Tyler Reddick starting one-two. Custer dove below Reddick on the backstretch and they made contact, but the No. 00 car got by Reddick to score the all-important victory.

● Custer won the O’Reilly Auto Parts 300 to score his second career Xfinity Series victory, first of the season and first at Texas.

● With this win, Custer automatically advances to the Championship round at Homestead-Miami Speedway Nov. 17.

Cole Custer, driver of the No. 00 Autodesk Ford Mustang for Stewart-Haas Racing With Biagi-DenBeste:

“I can’t believe it. The 1 (Elliott Sadler) is the best pusher in the series and I hated that I didn’t have him behind me. We did all we could. I drove it in deeper than I have all weekend and it worked out. I am pumped for Autodesk, their first time on the car. Gene Haas, I wouldn’t be here without him and Haas Automation. I am pumped. We are going to Homestead and I think we have a great shot of winning.

On the last restart when Tyler Reddick got away, what were you thinking? Did you know you had enough to time to get back to him?

“No, I thought it was going to be tough. I knew I had to make it happen in turns one and two because it was just hard to pass in three and four all day. I drove it into turn one probably five car lengths deeper than I had all day and it worked out somehow. I was able to get him loose on his bumper and get to his inside and we were side drafting on the back stretch and got together and it worked out in our favor I guess.”

“I think we have some confidence going in there but also I think it is just a point of us having to execute well and we have a really good baseline to go off of from last year. Things will change this year. There is a different tire and different body rules. The track will be the same. We need to stay on our game to make sure it is good but I think we have the best baseline out there and we will do our jobs to make sure it is right and I will make sure to do my job to make sure I am driving the car right.”

The next event on the NASCAR Xfinity Series schedule is the Whelen Trusted to Perform 200 on Saturday, Nov. 10 at ISM Raceway near Phoenix.