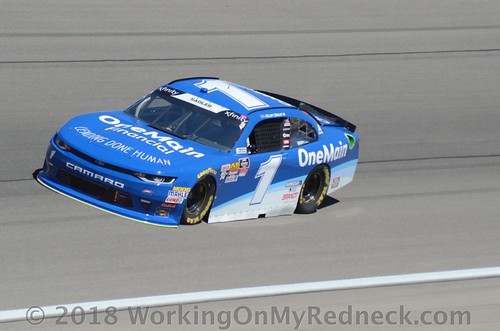 After claiming his 14th top five of the season at Kansas, Elliott Sadler takes over the NASCAR Xfinity Series Playoff standings lead following a 10-point penalty to the No. 21.

• Sadler is now just two top-five finishes away from a personal career-high in a single season. His current best is 15 top fives, which he earned in 2012.

• At Texas, Sadler is first among NXS regulars in fastest laps run (65).

“Being able to head to Texas in our current points position gives us some relief, but we still need to go out there and give it our all. As we saw in Kansas, anything can happen in these playoff races. We still have a long way to go to get to Homestead and these next two races are crucial in making the Championship 4. I couldn’t be more proud of my OneMain Financial team and all of the hard work they’ve done to get us to where we are today – in first place with three races to go. I wouldn’t want to be chasing my final championship with anyone else.”